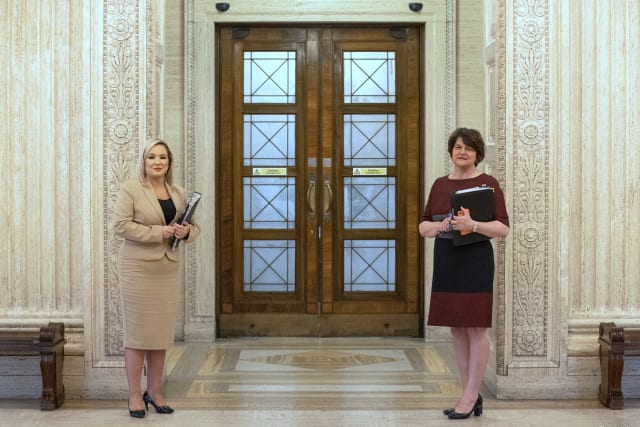 Northern Ireland’s First and Deputy First Minister have said the Westminster government should fund a pension scheme for those injured in the Troubles.

The payments have been delayed amid a stand-off between Belfast and London on who pays for the estimated £100 million cost.

“This was agreed as part of the budget the Executive have,” he said.

Victims are considering taking legal action over the delays to payments.

Alan McBride, of the Wave Trauma Centre, said the Northern Ireland Executive was put on notice on Friday to put the correct structures in place or face court action.

He said a judicial review will focus on the Executive’s “failure to comply with legislation to provide payments for those severely injured through no fault of their own during the Troubles in Northern Ireland”.

Victims Commissioner Judith Thompson has also criticised the delay, describing it as “unacceptable”.

The Victims Payment Scheme had been due to open for applications on May 29.

However, it has emerged the scheme will not be opening as scheduled and that structures set out in the regulations, passed into law in January 2020, to administer the scheme have not been set up.

First Minister Arlene Foster was asked about the delay at Stormont’s daily media briefing on coronavirus.

She restated her position that the funds for the pension scheme should come from Westminster.

“This pension went through the Westminster Parliament, the regulations were set at Westminster before the Stormont Executive returned in January,” she said.

“Therefore we take a very clear view in relation to the funding, we are committed to delivering this pension as part of the New Decade New Approach.

“But we do have to deal with the funding, it’s quite a lot of money and therefore we need to be able to make sure that we can deliver.

“There is a legitimate expectation, we both expect that it has to be delivered and therefore we need to get on and deliver it, and I am very much committed to that.”

Deputy First Minister Michelle O’Neill added: “This is about restoring dignity, this is about supporting those people that have been both physically and psychologically injured as a result of the conflict.

“Clearly there is a need on the British government in terms of the funding package that’s required in order to get this payment put into place.”