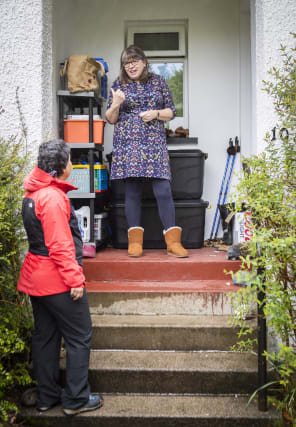 Scotland has been named as the most neighbourly place to live in the UK during lockdown, according to new research.

The study by Co-op Insurance and Neighbourhood Watch suggests nearly half of Scots homeowners and renters (43%) have checked in on their neighbours in recent weeks during the coronavirus pandemic.

London came at the bottom of the list as just a quarter (25%) have checked in on neighbours amid Covid-19 lockdown.

Andrew Nevitt, head of products at Co-op Insurance, said: “Scotland is leading the way by stepping up to help their neighbours.

“Our research shows just how important being a good neighbour is in creating a strong sense of community, especially during this time of crisis, and it looks like Scotland is doing this particularly well.”

In Scotland, 42% of people who know their neighbours have spoken to them over a fence or a wall, while 29% have waved through a window.

A quarter (26%) also said they know at least some of their neighbours and have spoken to them more in the past few weeks than they did previously.

However one in six Londoners (17%) said they did not know any of their neighbours.

As part of the study, Musarat Hashmi, from Cupar in Fife, has been named Co-op Insurance’s Scotland neighbour of the year 2019.

Mr Hashmi said: “It’s good neighbours in Scotland checking in on each other during this difficult time.

“I’m not surprised that Scotland is the most neighbourly area, given how supportive I’ve found my own community.

“Little things like saying hello over a garden fence, waving at a neighbour through a window or getting in touch to see if they need any essential food dropping off outside may not seem like a lot but will make the world of difference to those who may be struggling during the pandemic.”