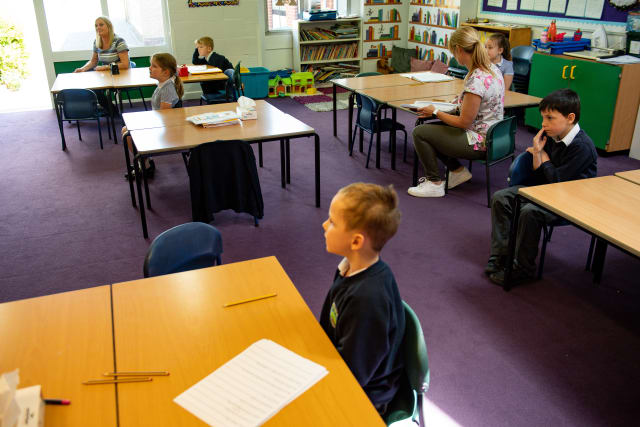 The majority of school support staff remain unconvinced by the Government’s messaging that schools in England will be safe to open to more pupils from June 1, a survey suggests.

Only 2% of school support staff said they felt reassured by Boris Johnson’s speech and recent Government guidance that it would be safe if pupil numbers increased from next month, according to a poll by Unison who have warned against rushing to reopen schools to meet an “arbitrary date”.

It comes as the Government’s scientific experts prepare to publish evidence underpinning the decision to reopen England’s schools to more pupils from the beginning of June.

With just 10 days to go until schools could reopen more widely, ministers have come under increasing pressure from education unions and council leaders who have urged the Government to reconsider their plans to send pupils in nursery, Reception, Year 1 and Year 6 back to school from as early as June 1.

More than a dozen local authorities, which are predominantly Labour-run councils in the north of England, have said they will not be advising schools to reopen more widely on June 1.

Ahead of the publication of official evidence from the Scientific Advisory Group for Emergencies (Sage), a former government chief scientific adviser has said June 1 is “too early” for schools to reopen.

A report from Sir David King, who has convened a separate “independent” panel of scientists, suggests delaying the reopening of schools by two weeks until June 15 “approximately halves the risk to children”.

“What is needed now is local flexibility to determine when it is right for schools to open up to more pupils, informed by evidence of what is happening in their own local area.”

The warning came as a separate scientific review of studies worldwide found that children and young people could be half as likely to catch coronavirus than adults.

The analysis, of global test and tracing and population screening studies led by University College London (UCL), also found the evidence “remains weak” on the likelihood that children transmit the virus.

A Unison poll, of more than 45,000 support staff in schools, suggests that nearly a third (30%) of staff are suffering with high anxiety or are losing sleep over the plans to increase pupil numbers from next month.

More than three in four (77%) say they are not confident that their school has the staff resources and expertise to ensure all health and safety measures and risk assessments will be in place in time.

Of those with school age children, 95% said they did not feel it was safe to send them back to school. One worker said she was “petrified” at the thought of her child going back, according to Unison.

The poll, of teaching assistants, cleaners and admin staff, comes after the Government announced its ambition for all primary school pupils in England to go back to school for a month before the summer.

But the governments of Scotland and Northern Ireland are not planning to reopen until August.

Jon Richards, head of education at Unison, said: “Ministers shouldn’t gamble with the safety of pupils, staff and the wider community by sending them back to school too early.”

“Staff, parents and schools aren’t ready to go back without reassurances that safety is the number one priority.

“Unions want to work with ministers to make schools as safe as possible, so that parents, their children and staff will want to return.

“But the rush to get some schools open to meet an arbitrary date isn’t at all helpful.”

A Department for Education spokesperson said: “We want children back in schools as soon as possible because being with their teachers and friends is so important for their education and their well-being.

“Plans for a cautious, phased return of some year groups from June 1, at the earliest, are based on the best scientific and medical advice.

“The welfare of children and staff has been at the heart of all decision making.”