Huge four-metre sinkhole will take a month to fix 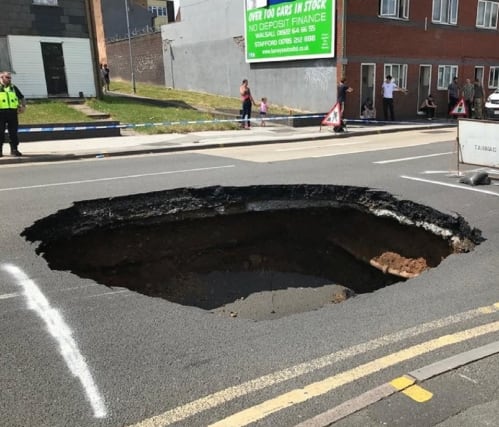 A collapsed sewer which caused a four-metre (13ft) sinkhole to open up in the middle of a busy road will take at least a month to fix.

The opening, which is wider than an average family saloon car and about three metres (10ft) deep, appeared just after lunchtime on Thursday, in Walsall, West Midlands.

Engineers from Severn Trent Water, who have been assessing the damage, identified a collapsed sewer as the culprit adding the repair would be “very complicated” and “take at least four weeks to complete”.

Meanwhile, the road will remain shut until further notice.

Walsall Council said it first had a report of a “shallow dip” in Stafford Street earlier in the week, but inspectors found no cracks visible and nothing to show an immediate problem.

Following a further assessment on Thursday, signs were put up to warn drivers of an uneven road surface and plans made for Severn Trent to take a more detailed look – however, the sinkhole then opened up at about 1pm.

The road was closed and has also been fenced off.

“Our priority now is to see the repairs completed as quickly as possible and Stafford Street reopened to traffic,” he added.

A Severn Trent Water spokesman said: “Our teams have confirmed the issue was caused by a collapsed sewer under the road, which has now been closed to keep our teams and drivers safe.”

He added: “At this early stage, it looks like it’s going to be a very complicated repair that’ll take at least four weeks to complete.

“We’d like to apologise to everyone who’s been affected by the closure and assure them we’ll be working seven days a week once we’ve got a repair plan in place to get everything back to normal as quickly as possible.”