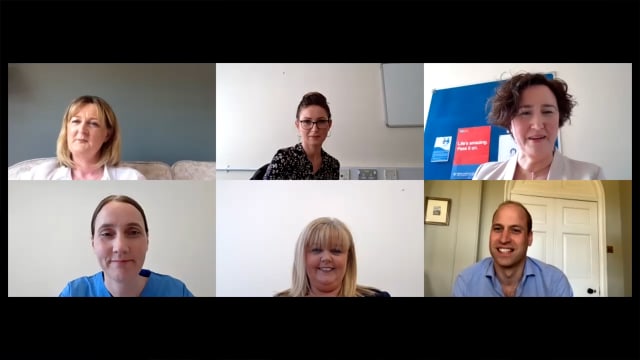 The Duke of Cambridge has heard how children have been given giant teddy bears to hug by proxy because they have to socially distance from their carers, in a video call with care providers in Northern Ireland.

William was told that innovative ways have been thought up to put vulnerable children at ease during the coronavirus crisis.

These include staff in Belfast printing photos of themselves smiling and pinning them to their front, while they are wearing masks or visors.

The duke declared “everyone needs a hug”, as social worker Eimear Hanna described how staff had bought the bears as substitutes for the youngest in their care, and stand beside them as they cuddle the toys.

Ms Hanna, who is in charge of nine out of the ten children’s homes in the city, said: “Our staff have bought huge, big teddy bears especially for the younger people who really need hugs – so if you want a hug, here you go, they hug the teddy with the staff beside them.

“Staff are coming up with really innovative ideas and they’re absolutely working.”

William told the five health professionals from the Belfast Health and Social Care Trust, which delivers care to about 340,000 in the city: “It must be very difficult not being able to provide that human touch, that kind of face-to-face care.

“It’s very difficult when you’re behind a mask and goggles and aprons.”

The duke also spoke of how “we’re all muddling through this period” as he raised concerns about the future effects of the pandemic on children’s mental health.

“I’m particularly worried as to how the young people are going to cope long term, because we’re all muddling through this period at the moment and helping each other,” he said.

“But the long-term implications of school being missed, anxiety levels, family members sadly dying and the sort of general economic outlook… Do you think that’s going to play heavily on your services and what they’ll need?”

Consultant psychiatrist Frances Doherty, who runs the Beechcroft Regional Child and Adolescent Mental Health Service (CAMHS) Inpatient Service, said that while some referral rates had dipped in the short term, she expected them to rise in the future.

“I would imagine that as we’re starting to come out of lockdown and people are starting to get back into the world again, starting to realise just what we’ve been through, I think that we will start to see our referral rate increase and the impact on services,” she said.

“But I think it will be on the other side of it we’ll really have all the challenges that you mentioned.”

William, father to Prince George, Princess Charlotte and Prince Louis, acknowledged the difficulties in getting children to socially distance.

Dr McKenna said she works with a lot of non-verbal children who rely on looking at faces to communicate.

“The staff have been very creative and taken big smiling pictures of themselves and pinned those to their front, so the child knows what they look like under their mask,” she said.

At the end of the call, William expressed his thanks to those working for the Trust.

“I know it’s unprecedented and it’s quite scary and it’s daunting, but you’re all making a huge difference so please pass on to all your teams how grateful everyone is and how appreciative everyone is for everything they’re doing at the moment,” he said.