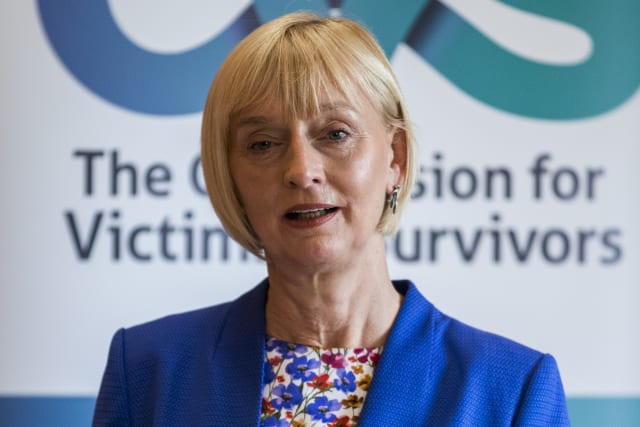 Northern Ireland’s Victims’ Commissioner has accused the authorities of adding insult to the injury sustained by thousands of conflict survivors by failing to introduce a pension scheme as scheduled.

In a scathing critique of the UK Government and the Stormont Executive, Judith Thompson said victims had once again been allowed to slip down the list of priorities.

She said severely injured victims may be forced to go to court to secure the pension they long campaigned for.

“That is shameful,” she told the PA news agency.

The commissioner also singled out the Government for further criticism for axing plans for independent investigations of all unsolved Troubles killings, accusing it of playing to MPs at Westminster rather than focusing on the needs of families seeking truth and justice.

Mrs Thompson raised additional concerns about the apparent suspension of work to develop a Regional Trauma Network to enhance care and treatment for the estimated 200,000 people who were mentally scarred by the conflict.

Amid a stand-off between Belfast and London on who pays for the £100 million pension scheme, the commissioner accused both administrations of failing to work together for victims.

She expressed concern that some victims would die before the scheme finally is implemented.

“People have died on the road to this place and more will die without seeing it if we don’t move,” she said.

“The institutions to do it, the actual mechanisms to do it are not in place and it is not now feasible that they will be in place by May 29,” the commissioner said.

“So people who wore their injuries well and fought a long, hard fight to get some recognition and a standard of living now suddenly find their perception is that this is all slipping away from under their feet. It is incredibly cruel.”

Mrs Thompson said the coronavirus emergency could not be used as an excuse to delay the pension for victims.

“This has sort of gone under the radar because of Covid,” she said.

“These people understand the impact of Covid. Most of them are in vulnerable groups and self-isolating and at risk. But it’s not OK for the law not to be implemented for this group of people.”

She added: “The victims and survivors cannot slip off the agenda again and become the ‘too difficult to do’ thing under cover of Covid.”

The commissioner said those who had found out about the delay had been left “incredibly upset, angry and hurt”.

Mrs Thompson said the victims may ultimately have to resort to the courts to force action.

“Where this will and should end if it’s not sorted, is in victims and survivors having to take the Government to court for not implementing the law, because this is the law – that is shameful,” she said.

In March, the Government announced that only Troubles killings with “compelling” new evidence and a realistic prospect of prosecution will receive a full police re-investigation.

It said most unsolved cases will be closed and a new law would prevent those investigations into the decades of violence from being re-opened.

This marked a dramatic step away from mechanisms agreed by the UK and Irish government and main Stormont parties in the 2014 Stormont House Agreement.

A Government pledge to table its new legacy legislation within 100 days of the January deal that restored powersharing at Stormont has not been met, and no new laws have yet materialised.

“That leaves victims and survivors facing they know not what,” said Mrs Thompson.

“Because we have no clarification, nothing in writing to say what does that substantial change look like.”

She said there were fears in the victims’ community that the Government would try to push through legislation that was not fit for purpose in a “quick and politically expedient way”.

Referencing pressure from Tory backbenchers for steps to limit prosecutions of veterans, the commissioner added: “What plays in Westminster does not necessarily meet anyone’s needs here.

“I’m not hearing people here, whatever their background, saying to me ‘we want a quick way of closing all this down’.

“That is not what victims and survivors, whoever they are, are saying here, they understand this matters to many, many people in our community.”

“We have about 200,000 people in Northern Ireland who have got a significant mental health impact as a consequence of being injured, blown up, witnessing death, losing people they loved or many of those repeatedly,” she said.

“We have the highest levels of PTSD in the world and it’s having a transgenerational impact.

“It’s blindingly obvious that to be a healthy place where people can move forward better, we need a health service as well as a voluntary sector that understands and responds to those needs.

“Victims and survivors understand the impact of Covid. They’re not trying to push themselves over other people.

“But we can’t take our eye off this, this needs to be on the agenda.”

A UK Government spokesman said in line with commitments in the New Decade, New Approach powersharing deal, the Northern Ireland Office published a written ministerial statement setting out a framework for legislation to address the legacy of the past.

“The wider context in which we (UKG) are currently working is very challenging and has unsurprisingly had an impact on our planned timetable, but we have begun the engagement process with key partners and remain committed to making progress on this important issue.”

A Health Department statement said: “Covid-19 has interrupted a number of important pieces of work, the commitment to deliver a Regional Trauma Network is important to us and we are hoping to progress that work further as soon as current pressures allow.”