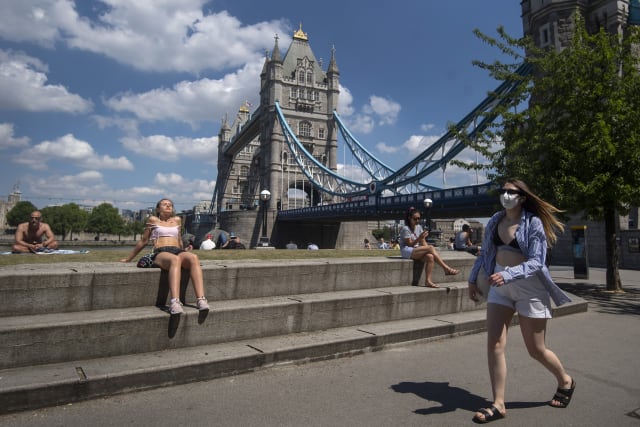 Number 10 has sought to defend the track and trace programme being put in place for June 1, despite one expert warning it would be “crazy” not to use an app.

Downing Street announced on Thursday that 25,000 human contact tracers would be ready and trained come June 1, the earliest date for primary schools and some non-essential shops to reopen across England.

A Number 10 spokesman said the app would be ready within the “coming weeks”, saying piloting was still taking place on the Isle of Wight.

Carsten Maple, professor of cyber systems engineering at the University of Warwick, said the promised NHS app was likely to have a strong uptake from the public and it would be wrong not to use it.

He said :“I think it would be crazy not to use an app.

“Our recent research has shown that, if designed correctly, the app could be very efficient and have strong uptake from the public.”

He said the number of contacts who needed to be traced using human contact tracers was dependent on how good the app was that supports them.

“If there is a very efficient app, then we may not need the levels the Prime Minister is promising,” he said.

“However, if there is no app, the figures mentioned may not be sufficient.”

Prof Maple said the app designed by the NHS’ digital arm, NHSX, “should be part of any solution for contact tracing”.

He said employing manual contact tracers was working well in other countries but was costly and a dual approach was best.

The PM’s spokesman said on Thursday that human contact tracers were core to the programme.

On whether a manual system, without the support of an app, would be enough to hold back the virus, he added: “I’ve said the intention is to roll the app out in the coming weeks but I’ve also said there is certainly no requirement to have the app in order to have an effective trace and system, which the PM spoke about, in place by June 1.”

It comes as Mr Hancock is set to announce further details on who is eligible for a new antibody test, after a deal was reached with pharmaceutical giant Roche.

NHS and social care workers will be prioritised for the tests, but NHS England medical director Professor Stephen Powis refused to be drawn on Wednesday on whether the general public would get one at some point.

– John Holland-Kaye, chief executive of Heathrow Airport, signalled his tacit support for Government plans to impose a 14-day quarantine programme for anyone arriving in the UK from abroad, but firmly backed the idea of “air bridges” between countries with lower infection levels.

– EasyJet is to resume a small number of mainly domestic flights from 22 European airports from June 15.

– Crime in England and Wales has fallen by a quarter during the Covid-19 lockdown, new figures show.

– There was no evidence of increased infection from coronavirus among frontline NHS and care staff compared with those not working in such roles during two weeks in May, according to the Office for National Statistics.

– Welsh health minister Vaughan Gething defended his government’s policy on coronavirus testing in care homes, after the Older People’s Commissioner for Wales reported the administration to the Equality and Human Rights Commission (EHRC) over alleged failures.

Earlier on Thursday, the NHS Confederation issued a stark warning that time is running out to finalise a track and trace strategy to avoid a potential second surge of Covid-19.

Niall Dickson, chief executive of the body which represents health and care leaders, has written to Mr Hancock saying there could be “severe” consequences to staff and patients if the right system is not put in place quickly.

He added that the lockdown should not be eased further until a clear plan is in place, which must involve local leaders with experience in contact tracing.

In the letter, he said: “We are 10 weeks into the pandemic, and developing a strategy with a well-worked-through local base should have been in place much sooner.

“If we do not rapidly instigate the right system, involving the right people, then the ramifications for the NHS, including its staff and its patients, could be severe.”

Mr Dickson told BBC Radio 4’s Today programme the detail was coming too late and urged the Government to “get on” with it.

He said: “We are absolutely clear that contact tracing is the right thing to do, it is absolutely critical, it has got to be in place to prevent any notion of a second surge if the lockdown is being further released.

“I think, like everyone else, we support the Government’s determination to set up an effective system.

“Our concern is that this has been done quite late in the day, we haven’t yet seen the detail.

“In particular, I think we’re concerned at the role of local contact tracing and how that complements what is happening at national level.

“The directors of public health have expressed concern at not being involved until very recently.”

It comes as Scotland’s First Minister Nicola Sturgeon said meeting people outside, sunbathing and some sports are to be allowed in Scotland from the end of next week.

From August 11, all schools in Scotland will reopen, she added, but children will return to a “blended model of part-time in-school and part-time at-home learning”.