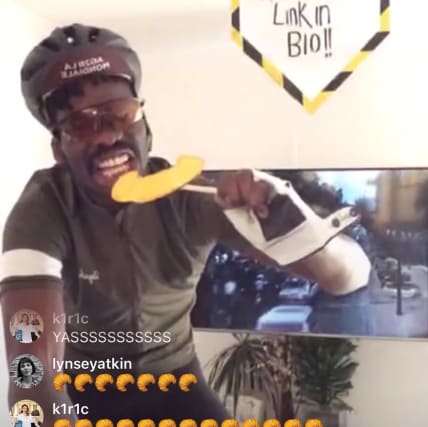 A novice cyclist is on the brink of completing a ride the distance of Wimbledon to St Tropez to raise money for his friend with terminal cancer.

Ben Chatfield, a 45-year-old creative consultant and author, was diagnosed with an aggressive brain tumour last year, shortly before the birth of his first child Ruby in July, and had not responded to radiotherapy or chemotherapy.

Friends and family are raising funds for a life-prolonging drug called Avastin, which is not available on the NHS and costs £10,000 per two-week cycle, to try and keep Ben alive to see his daughter’s first birthday.

Among those fundraising is Joe Ogunmokun, a 32-year-old producer who was given his start in the advertising industry as an intern by Mr Chatfield.

Mr Ogunmokun, who has not cycled since he was a child, decided to ride 856 miles, the distance from Wimbledon to St Tropez, on a static bike at his Enfield home to honour two of Mr Chatfield’s great loves.

“He’s written a book about Wimbledon.

“He’s also a Francophile and a lover of Mediterranean Europe and St Tropez’s one of his favourite places in the world, so it seemed like a no-brainer for me to pay homage by cycling between those two places.”

Mr Ogunmokun took on the challenge, which he is streaming live on Instagram, despite describing himself as a “complete novice” in the saddle.

“I think the last time I cycled was probably to try and meet up with some girls in the park when I was 12 so it’s been a while,” he said.

The challenge is extremely personal for Mr Ogunmokun, who sees Mr Chatfield has a close friend and mentor, saying his decision to hire him as an intern “changed my life forever”.

Mr Ogunmokun described him as “one of the coolest people I’ve ever known” with an “incredible mind”, adding: “He’s one of those people you don’t ever want to let down.”

He said: “It’s just such a sad situation that of all the diseases for him to be battling it’s the one that took away the faculties that mean the most to him: his mind, his brain, his reading, his writing.

“Ben’s an amazing, amazing man and he means the world to me.

“I guess right now this is the only way I can show my love and my gratitude.”

Fundraisers passed their initial target of £60,000, for six rounds of treatment, withing 25 hours and, with Mr Ogunmokun’s help, are now closing in on £100,000.

The money being raised is going towards funding Avastin for Mr Chatfield, with any additional funds going to the Royal Marsden hospital, where he is being treated.

“There isn’t a lot of longevity in the outlook,” Mr Ogunmokun said.

“We’re just pushing for as much of Ben’s life as possible at this point.

“The first benchmark is his daughter Ruby’s first birthday in July.

“We’re praying and we’re hoping and we’re willing Ben on to that point so he can see Ruby’s first birthday in July, and from then on it’s just a matter of will power and strength from Ben, from (his wife) Victoria and from Ruby for him to experience as much life as possible each day.”

Mr Ogunmokun is scheduled to complete his ride on Saturday, which is Mr Chatfield’s birthday.

You can donate money at https://www.gofundme.com/f/ben-chatfield