How lockdown rules have been eased around UK 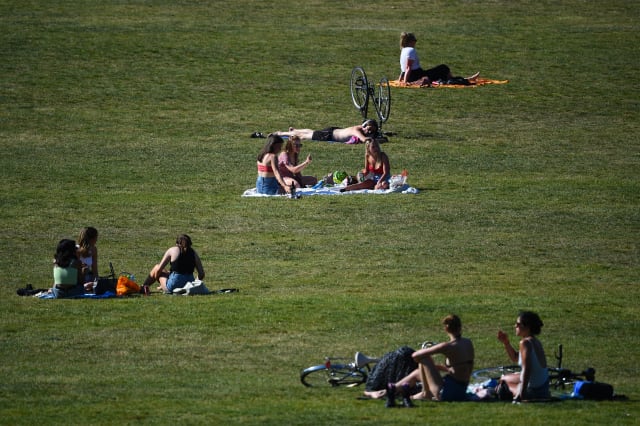 As Nicola Sturgeon set out her route map to take Scotland out of lockdown, different approaches to restrictions have emerged around the UK.

Public health is a devolved responsibility so administrations in Scotland, Wales and Northern Ireland can choose different policies to Boris Johnson’s Government.

The nature of the lockdown restrictions has been broadly similar since March 23 but differences have started to become clear this month.

The unified stance at the start of the crisis was described as a “four nations” approach.

Here’s how the situation stands around the UK.

Scotland’s First Minister Nicola Sturgeon outlined a four-phase path out of the lockdown, with the first beginning on May 28.

From that point, Scots will be able to meet people from one other household outside and while social distancing.

Non-contact outdoor sports will be allowed to return, such as such as golf, tennis, bowls and fishing, as will sitting in parks and sunbathing.

Recreational trips “broadly within five miles” are permitted but these should be done by walking or cycling wherever possible.

Outdoor businesses and garden centres will resume from May 28 and schools are due to go back from August 11.

Boris Johnson’s announcement on May 10 came with a new slogan: “Stay alert, control the virus, save lives.”

The change was criticised by Ms Sturgeon, who said he should make it clear the changes only applied to England.

He went beyond allowing more exercise, encouraging people to go back to work in sectors such as construction and manufacturing, which had previously been closed.

Rules around socialising were also changed, with people in England allowed to meet one person from outside their household, providing the encounter was socially distanced and took place outside.

Significantly, people are allowed to drive any distance within England for day trips or certain outdoor activities.

Other elements of the lockdown remain in place, with the UK Government saying people should work from home wherever possible.

Welsh First Minister Mark Drakeford has made clear the “stay at home” message still applies there.

Police in Wales have had to take action in several cases when visitors from England have driven to scenic spots across the border.

The Welsh Government has now increased fines for people who flout rules against non-essential travel, with a maximum penalty of £1,920.

Health Minister Vaughan Gething has said there could be changes to rules against outdoor meetings at a review of the lockdown next week.

Details of these changes have not yet been confirmed.

People in Wales can exercise outside more than once a day but must do so locally.

In general, people are advised to stay at home “as much as possible.”

A number of changes to lockdown measures were introduced in Northern Ireland on Monday.

People from different households can now meet outside in gatherings of four to six.

Drive-in religious services are allowed and churches can be used for solitary prayer.

There were queues at garden centres and recycling facilities as they reopened.

Indoor gatherings of different households are still banned but this is being kept under review as Northern Ireland takes “small steps” out of lockdown, First Minister Arlene Foster has said.