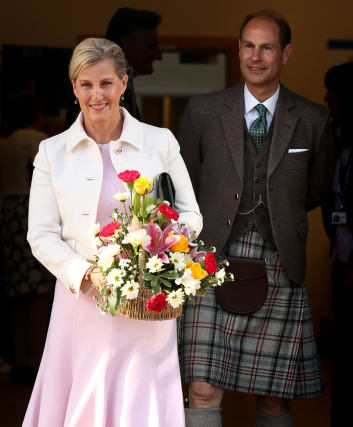 The Earl and Countess of Wessex have paid tribute in a video message to people working on the coronavirus emergency in local resilience forums.

The forums are partnerships between councils and public services, including the police, fire services and NHS, which respond to crises at a local level.

Edward said: “During this time of great challenge, we want to pay tribute to those of you who through the local resilience forums are managing to keep essential services operating within the county.

“Your role may be unsung, but do not underestimate the value that your various skills, assets and experiences bring.”

Sophie added: “You’re all professionals, looking after volunteers as well as being volunteers yourselves.

“Thank you for what you’re doing. And thank you also to your families who are supporting you and allowing you to do this important work.

“On behalf of all of the people of Wessex, thank you all for stepping forward and doing what you’re doing.”

The message was aimed at local resilience forums in Wessex.

Wessex no longer exists – the ancient Anglo-Saxon kingdom was established in the sixth century and stretched at times from Cornwall to Kent, with Winchester at its heart.

It was also used by the 19th century author Thomas Hardy to represent the region in the south and south west of England where he set his novels.

Edward was given his title the Earl of Wessex on his wedding day in 1999 by his mother the Queen.

The royal family also thanked council staff for delivering food packages to people who are shielding at home.

More than 1.5 million boxes of essential groceries have been delivered to those who are clinically extremely vulnerable, according to the Ministry of Housing, Communities and Local Government.

The monarchy’s Twitter account praised the councils’ key workers across the country for “leading the local response to the pandemic”.

Firefighters have also been working with councils to deliver medication to those unable to leave their homes.

The royal family tweeted: “Councils have been teaming up with Fire and Rescue Services to deliver vital medication to the most vulnerable members of the community who are shielding at home, on behalf of local pharmacies and hospitals.”