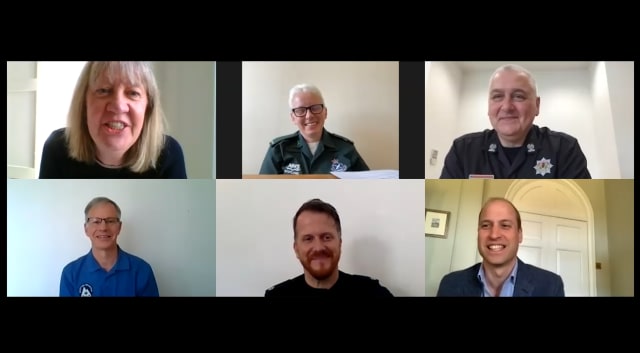 The Duke of Cambridge has called for more to be done to prepare emergency workers and volunteer responders for the traumatic experiences they will face at work.

William, known as the Earl of Strathearn while in Scotland, spoke to a group of 999 workers and a mountain rescue volunteer over video call on Wednesday.

He chatted with people from Lifelines Scotland, which helps emergency responders and volunteers learn how to cope with stress and look after their own mental health.

During the call, William suggested their training should be designed so they are better able to cope with the potentially psychologically scarring incidents they will encounter.

He said: “The training is not there from the beginning.

“In the same way that we all have checklists and flight reference cards and all these things that we follow to make sure we are not missing anything, that all the right procedures are done, we need to have the same thing with mental health.

“We need to have that moment.”

Steve Penny, a mountain rescue volunteer, was among those on the call.

He said he was once inspired to seek help for himself after watching a documentary with William and his brother Harry.

The 59-year-old, a well-being officer for Scottish Mountain Rescue, said William was particularly interested in the challenges faced by volunteers.

He said: “We are taken away from our families or our employment at a moment’s notice to go and deal with something.

“That may be a very difficult case. Then we have to come in again and pick up where we left off.

“It is clearly a point of interest to him, to make sure this understanding, education and support is available to everybody, not merely the emergency services but the volunteer services that come in behind that.

“He is very keen that volunteers are offered the same sort of support.”

Paramedic Gail Topping said former air ambulance pilot William also suggested there should be more preparation before people are exposed to anything that could have a psychological effect.

She said: “That preparation and education is very important.

“He was passionate about the preparation – forearming people before they are exposed, giving them the tools that will increase their resilience prior to that exposure.

“The duke was very keen for that to be developed.”

Lifelines Scotland was established in 2016 by the Rivers Centre for Traumatic Stress in NHS Lothian to promote the resilience and well-being of the country’s volunteer emergency responders.

The project – a collaboration between the NHS, volunteers, charities, unions and Government in Scotland – was recently extended to the include blue light services.

Gill Moreton, the charity’s founder, said: “Rather than waiting until people are not well and then providing treatment, it is working to see how we can help people stay well in the first place, and help them understand some of the challenges they are going to face.”