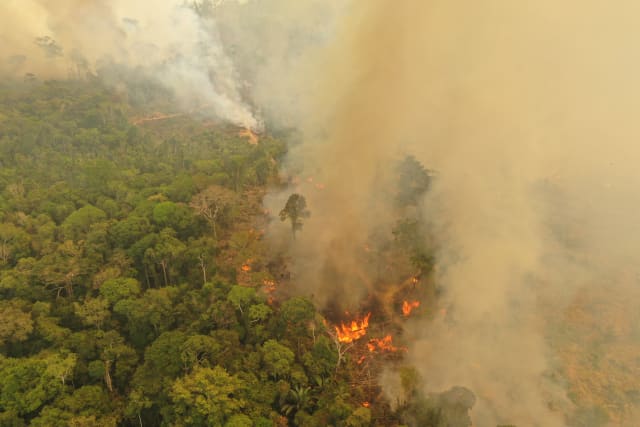 British supermarkets have warned Brazil that they could stop sourcing products from the country if a new law which threatens the Amazon is passed.

The major UK supermarket chains have joined with other retailers and businesses to raise concerns over a vote to legalise the private occupation of public land, mostly in the Amazon, which it is feared will drive deforestation.

Retailers warn that further land grabs and deforestation enabled by the legislation will “jeopardise the survival of the Amazon”.

It will make it harder to meet international targets to tackle climate change, as forests are huge carbon stores, and undermine the rights of indigenous communities in the region.

“We believe that it would also put at risk the ability of organisations such as ours to continue sourcing from Brazil in the future,” they said in an open letter to Brazilian politicians.

Conservationists warn that the law, which comes after widespread fires in the Amazon last year, will legitimise previous illegal land grabs and pave the way for more deforestation for agriculture such as beef and soy.

Giles Bolton, responsible sourcing director at Tesco, said: “The Amazon is a vital environmental resource for the world and we want to work with local partners to ensure that protecting it is also the best economic option for Brazil.

“But providing an amnesty for the minority who have already destroyed parts of it would encourage more destruction.

“Should this proposal pass, the ability of leading businesses to continue sourcing there will inevitably be called into question.”

Tanya Steele, chief executive of wildlife charity WWF-UK, said: “If passed, this vote in the Brazilian Congress is likely to open the floodgates for further seizures of public lands and protected forests and act as another nail in the coffin of the Amazon.

“Deforestation is now one of the biggest threats we face, both to our planet’s health and our own.

“Every hectare of the Amazon that is cleared takes us closer both to the next pandemic and to catastrophic climate change.

“The Amazon is poised on the edge of an abyss, with increased deforestation making a repeat of last year’s terrible fires ever more likely.”