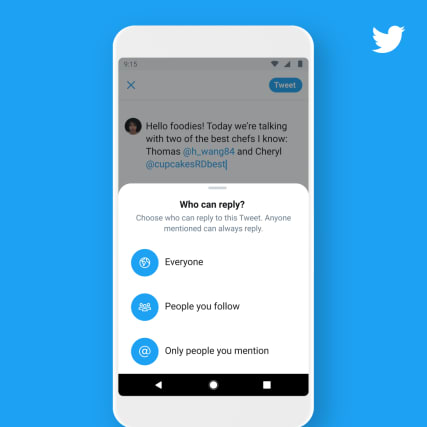 Twitter has started testing a new feature allowing users to control who can reply to their tweets.

The social network first mooted the idea at the beginning of the year as a way to make individuals “feel safe and comfortable” using the platform.

The controls mean people can choose one of three options before tweeting, either everyone – the standard and default Twitter setting used currently – only people you follow or only people you mention.

A label will appear for the two new options, with the reply icon greyed out so that people can see they are not able to reply.

“So, we’re exploring how we can improve these settings to give people more opportunities to weigh in while still giving people control over the conversations they start.”

Some users expressed concern when the idea was first revealed in January, saying they feared it would give public figures such as Donald Trump the power to hide replies and avoid public scrutiny.

“This is basically allowing people to spread misinformations and hide the truth without the fear of someone correcting them,” one user tweeted regarding Wednesday’s test announcement.