Stay alert: How has the UK Government slogan changed? 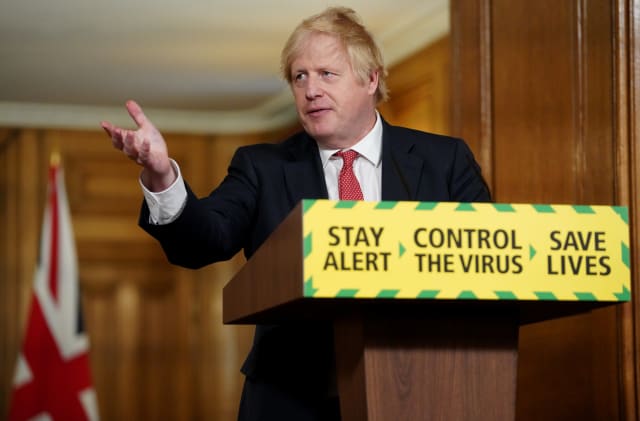 The messaging on the UK Government’s advice to “Stay alert” has been altered after ministers admitted the slogan needed further explanation.

– Is there a new slogan to get to grips with?

Not exactly, although the changes certainly are not in the name of making the current advice any catchier.

Under the “Stay alert” warning now comes the added advice to: “Keep our distance, wash our hands, think of others and play our part. All together.”

The advice has been tagged with a rainbow symbol, the sign being displayed in the windows of homes across the country to show support for  health workers caring for coronavirus patients during the current crisis.

Other wording seen in Government adverts in national newspapers include: “Stay two metres apart. We can help control the virus if we all stay alert.”

– Didn’t the UK Government only recently change the advice?

Yes, the Prime Minister changed the slogan from “Stay at home” to “Stay alert” when he eased some lockdown restrictions in England on May 10.

– Didn’t that upset a few people at the time?

Again, yes. Boris Johnson changed the advice but was criticised both by leaders of the devolved administrations and some health experts for doing so.

Scotland’s First Minister Nicola Sturgeon, who opted to keep most lockdown measures in place, said at the time that the “Stay alert” slogan was “very vague compared to ‘Stay at home’”.

Only England has deviated from the “Stay at home” warning, with Wales and Northern Ireland joining Scotland in keeping the firmer messaging in place.

Susan Michie, a professor of health psychology and member of a subcommittee of the Scientific Advisory Group for Emergencies (Sage), also criticised it saying it was “not very obvious what alert means, what people should be alert to”.

– Why have ministers added to the current slogan?

After making the initial switch to “Stay alert”, the Prime Minister said it was “absolutely the right message for our country now” and pointed to the fact that France had adopted similar messaging.

But it seems ministers felt some of their critics were on to something in criticising the vagueness of “Stay alert” and have now moved to explain what the public should be doing in being alert to the risk the virus poses.

Justice Secretary Robert Buckland, when asked about the changes on Sky News, said: “I think what we’re trying to do is explain underneath that general direction what that (‘stay alert’) means.

“Of course the different elements to staying alert, which include washing hands, keeping our distance, builds up to that general approach which is that we all must be very much aware not only of each other but what we can do in order to minimise the inadvertent transmission of this terrible disease.”

– What was the rationale behind changing to the “Stay alert” warning?

The UK Government wanted to find a way of distinguishing between the strict lockdown measures first imposed on March 23 and the changes the Prime Minister brought in for England on May 10.

When establishing the lockdown, Mr Johnson set out defined exceptions for leaving the house, which included going out to a job that could not be done from home and going shopping for essentials.

But in May, he loosened the rules to allow for people to meet a single family member or friend outside, while remaining two metres apart.

People who could not carry out their jobs from home were also recommended to return to work as soon as it was safe to do so, and garden centres were permitted to reopen.

– Will the lockdown be eased further?

Downing Street certainly hopes so, although not until it has proof that transmission is not increasing as a result of the first stage of easing restrictions.

While there is still much wrangling, the Prime Minister has given the green light for pupils in Reception, Year 1 and Year 6 to return to classrooms, albeit with social distancing measures in place, as of June 1.

But due to safety concerns expressed by teaching unions, headteachers and council leaders, not every school is expected to return by the target date, with Mr Buckland admitting there might not be a “uniform approach” to schools returning next month.

As part of the so-called “road map” out of lockdown, parts of the hospitality sector, including cinemas and bars, could start to reopen as of July.

The additional “Stay alert” advice appears to be a reminder from the UK Government that, even with life starting to revert back to a sense of normality, Covid-19 is likely to be something the country will have to live with, and defend itself against, until a vaccine can be found and mass produced.