Spiders that hunt in packs ‘stay smaller in size’ 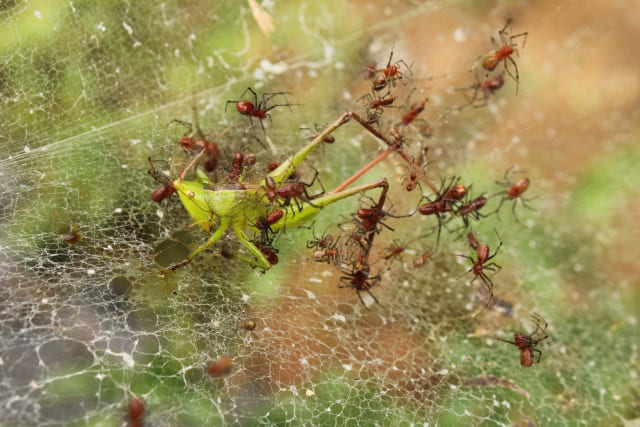 Spiders that hunt in packs are likely to remain smaller in size, according to research.

Scientists at the University of Portsmouth believe the collective effort by groups in catching prey reduces the evolutionary impetus for the spiders to grow.

In a report published in the Development, Genes and Evolution journal, senior lecturer in zoology Lena Grinsted compared spider size from a large number of social and non-social species.

She said: “Perhaps the most intriguing consequence of this new hypothesis is the suggestion that working together relaxes selection on body size on relatively large spiders.

“Our argument is that when these spiders start co-operating in catching prey, they can still catch the same really large prey, even if they start to mature at a smaller body size.

“And a smaller body size carries with it multiple overall fitness benefits when you live in a crowded group.”

Dr Grinsted said other benefits of smaller size were that a large insect would feed more of a group’s members and smaller spiders produce fewer eggs, meaning better quality offspring.

She said death rates are reduced in social species because they build larger, more-protective nest structures and do not need to risk travelling as much to find mates.

She added: “By analysing data on body sizes from lots of spider species and the size of their insect prey we found very strong support for our new theory, the ‘prey to predator size ratio hypothesis’.

“When spiders evolve the ability to catch prey co-operatively, we see a beneficial increase in the prey:predator body-size ratio.

“This increase can be achieved either by catching larger prey, as the classic theory suggests, or by evolving a smaller predator body size, as we see has happened in some social spiders.

“We welcome further studies testing the predictions generated from our hypothesis, to assess its relevance to other group hunting species.”