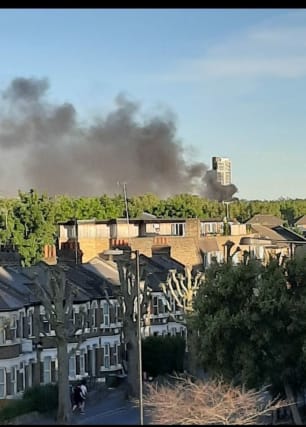 A blaze at a south-east London tower block has been brought “under control” after the building was evacuated, London Fire Brigade (LFB) has said.

The brigade said 12 fire engines and around 80 firefighters were called to the scene on Childers Street, Deptford.

A flat on the top floor of a six-storey block and the roof were alight, leading two people to leave the flat and forcing firefighters to evacuate the rest of the block.

There were no reports of injuries, Station Commander Emma Carr said.

“Two people left the affected flat and firefighters evacuated the rest of the block as a precaution due to the amount of smoke.

“This was a challenging incident due to the fire being in a roof hatch and firefighters worked hard to bring it under control.

“Aerial ladder platforms were used to tackle the blaze in the roof from height.”

Earlier, plumes of smoke were seen billowing from the tower block.

Firefighters were alerted at 7.26pm and 34 calls were made to the control room.

Local resident Agnes Agyepong said: “I turned the corner towards Childers Street and saw residents and bystanders standing out on the street.

“When I looked up I saw the top of the block of flats engulfed in flames.

“Thick black smoke was coming out as well.

“Children were witnessing this.

“Ashes were blowing in the street.”

Ms Agyepong said: “The mood was very sombre… people could not believe that they are on lockdown, and now this has happened on top of everything else.”