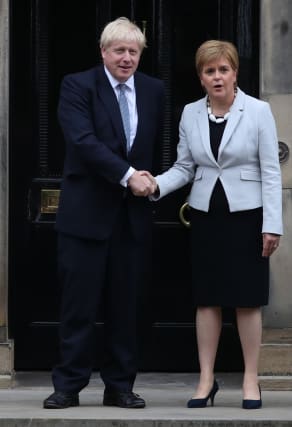 Boris Johnson’s desire for a UK-wide response to the coronavirus crisis may face further knocks when Nicola Sturgeon outlines her plans for easing the lockdown in Scotland.

The Scottish First minister will on Thursday detail how she will begin the “very gradual process” of easing restrictions north of the border while continuing to suppress the spread of Covid-19.

When the Prime Minister outlined his own plans for England, leaders of the devolved nations refused to adopt his “stay alert” advice and opted for a more cautious approach.

Ms Sturgeon declined to follow him in encouraging some workers back to their jobs, but has said she could begin relaxing measures from May 28.

The Westminster Government has repeatedly stressed that maintaining a unified response is favourable, but further divergences may be revealed by Ms Sturgeon when she addresses MSPs in Holyrood.

Key to the PM’s plan is the testing and tracing system, which he promised on Wednesday would be up and running with 25,000 staff by June 1.

Though the NHS app to aid tracing is delayed, that would mean the tracers will be in place by the earliest date earmarked for the gradual reopening of schools and shops in England.

Mr Johnson said the tracers would be able to track the contacts of up to 10,000 new coronavirus cases each day, which exceeds the current levels of confirmed daily infections.

And NHS England national medical director Professor Stephen Powis said the number of coronavirus patients in hospital had fallen below 10,000 for the first time since March.

But the PM’s plans for schools face some opposition from councils and unions who have concerns over safety.

Cabinet minister Robert Buckland conceded there may not be a “uniform approach” to reopening England’s schools.

Currently, Reception, Year 1 and Year 6 are due to go back from June 1 at the earliest, with other years phased in before the summer break.

Health Secretary Matt Hancock had said the contact tracing app would be rolled out across England from mid-May.

But Downing Street now says it will come “in the coming weeks”, some time after the human contact tracers begin their work.

Widespread contact tracing was abandoned in mid-March as the number of cases soared in the UK.

The number of deaths involving Covid-19 in the UK has now passed 44,500, according to the latest available data

– Culture Secretary Oliver Dowden said holidays within the UK could return as soon as the beginning of July, in a boost for the domestic tourism industry and locked-down Britons

– Rolls-Royce, which makes plane engines, said it will cut 9,000 jobs as it warned it will take “several years” for the airline industry to recover from the Covid-19 pandemic.