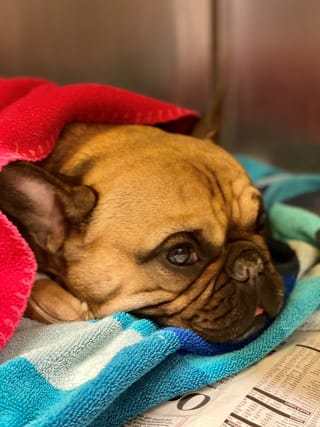 Pet owners are being warned to keep an eye on their animals while having a barbecue after one dog required emergency surgery when it wolfed down a corn-on-the-cob.

French Bulldog Krug – named after the Champagne – had to be rushed to a pet hospital last month.

PDSA’s pet hospitals are running an emergency-only service for animals in need during the coronavirus crisis.

Krug’s owner Victoria Stanley, 36, who lives in Gravesend in Kent, is urging other pet owners to be cautious if they are planning a barbecue this bank holiday weekend.

Ms Stanley said: “The weather has been beautiful so we decided to have a barbecue.

“That night Krug starting vomiting, and I guessed immediately that he’d eaten one of the corn-on-the-cobs which had gone missing.

“He kept being sick and acting strangely until the early hours so I called PDSA first thing the next morning.”

Krug was taken to Gillingham PDSA Pet Hospital, where vets performed scans and an X-ray.

Ms Stanley was warned her beloved pet would need an emergency operation to remove the cob, which could cause a potentially fatal blockage.

Anaesthesia and surgery always carry risks, but these risks are higher in brachycephalic (flat-faced) breeds, like Krug.

PDSA vet Jenni LePard said: “We knew we had to operate and when we opened up his stomach we found an entire corn-on-the-cob.

“With the warm weather here we’re seeing more cases of pets swallowing corn-on-the-cob and other harmful BBQ foods, such as bones and skewers.

“These can be incredibly dangerous, or even fatal in severe cases if they cause a blockage or perforations.”

Krug was kept in overnight at the hospital for monitoring following his surgery before being discharged on pain relief.

After lots of rest, he has gone on to make a full recovery.

But with the pandemic closing its retail shops and fundraising events being cancelled, the charity says it is losing around £3 million a month in income and is appealing for donations.