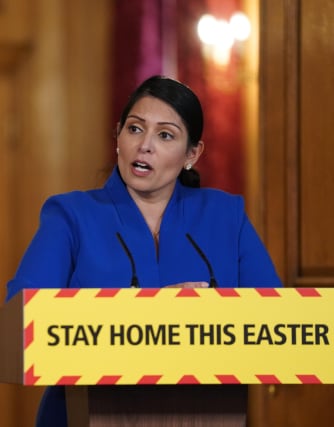 Priti Patel is “going to have a rude awakening” if she tries to change asylum laws, charities have warned.

The Home Secretary hinted during an interview on Wednesday morning that ministers are looking at trying to change immigration legislation, telling LBC: “We will be doing much more to enforce this whole principle of if you come from a safe country, you will be going back to that safe country.

“You will not be able to claim asylum in this country.”

Her comments came as the number of migrants who have been intercepted by Border Force in the English Channel and brought to Dover during the coronavirus lockdown reached at least 1,000, according to data gathered by the PA news agency.

At least 145 migrants made it to the UK on VE Day on May 8, believed to be a record for a single day.

More are believed to have made the dangerous crossing on Wednesday, with Border Force vessels active in the Channel.

Brexit Party leader Nigel Farage said on Twitter that he was out in the Channel on Wednesday morning and he claims to have seen “a small inflatable in trouble with over 20 on board”.

Bella Sankey, director of Detention Action, said: “Ms Patel is very misguided, on the law and on the implications of her Brexit policy.

“The Refugee Convention is clear that people have the right to seek sanctuary where they feel safe, not where the Home Secretary says they should.

“She is going to have a rude awakening.”

She said: “British people have helped refugees settle in the UK for centuries, from the French protestant refugees arriving in Dover in the 17th century, to the Kindertransport in the Second World War, to people fleeing Uganda in the 1970s.

“We should be proud of our ability to give people the chance to restart their lives and thrive.

“These people are fleeing conflict and persecution and want to seek asylum, but there are very few safe and legal ways for them to do this.

“We would encourage the Government to look at how we develop these rather than undertaking the extremely difficult – and possibly impossible – task of attempting to circumnavigate international law.”