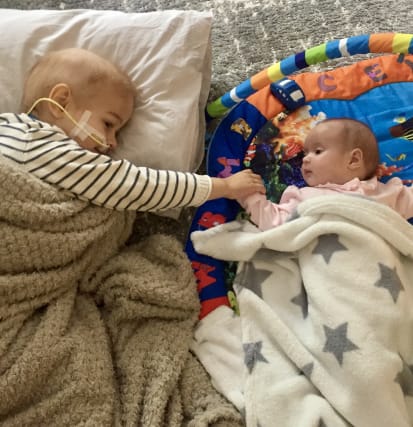 The grandmother of a four-year-old boy suffering from highly aggressive cancer is “devastated” after being told by the Home Office that she might have to leave the UK.

South African Jenny O’Neil has been helping care for her grandson Liam Scott as he undergoes gruelling neuroblastoma treatment.

The 67-year-old asked for her visa to be extended so she could continue to help her daughter and son-in-law care for Liam and his baby sister.

But on Friday she was informed by the Home Office that her application to extend her time in the UK on compassionate grounds has been refused.

The whole family has been shielding during lockdown due to Liam’s condition, all the while needing to raise £232,000 to take him to New York for a potentially life-saving cancer vaccine.

His family say time is running out to raise the remaining £89,000.

The fundraising page can be accessed here: https://www.solvingkidscancer.org.uk/Appeal/liam

Speaking to the PA news agency, Ms O’Neil said: “I was absolutely devastated when I got the response.

“They knew right from the word go (about Liam’s cancer) because they had a letter from the consultant to say what his condition was and everything.

“But clearly they did not understand too much about neuroblastoma.”

Neuroblastoma is a rare cancer affecting around 100 UK children each year.

The Home Office has since said that it is “reviewing her case”.

Ms O’Neil lives in Sevenoaks in Kent with her daughter and her daughter’s husband, and their two children: Liam, four, and his baby sister Kylie.

Looking after Liam is a busy role, Ms O’Neil said, as the youngster takes up to 18 different medications a day and has a very weak immune system.

She added: “It’s a constant, full-time situation and then we have got little Kylie.

“I am still helping (Liam’s mother) Claire with the fundraising.

“She is my daughter so I am trying my best for the family, and I would be absolutely devastated if I have to leave and I can’t assist them.”

Ms O’Neil originally came to the UK for the birth of Kylie in July 2019, but the very next day the family were heartbroken to find out Liam had cancer and would need treatment.

Since then she has been helping Liam’s parents care for the two children while Liam undergoes months of chemotherapy, radiation and immunotherapy.

So far more than £143,000 has been raised in their fundraising drive but they still need to gather the remaining £89,000, and time is running out.

Liam is due to continue with immunotherapy until the end of August, after which his family hope to take him to New York for the cancer vaccine.

Ms O’Neil has been living in the UK legally while she waited for a response from the Home Office after applying for an extension to her visa in November 2019.

On Friday she received a letter from the Home Office saying her application had been refused and she would have to either appeal the decision, make a make a new application, or leave the UK before her leave expires.

Ms O’Neil said she was particularly shocked by the suggestion in the letter that Kylie could be enrolled in childcare, when the whole family has been told to shield during the pandemic.

She added: “I’m not asking for indefinite leave to remain (ILR), I do have to go back at some stage.”

A Home Office spokesperson said: “We understand that Ms O’Neil is in a difficult situation, and we are reviewing her case.”

It added that all immigration applications are considered on their individual merits and in line with the immigration rules.