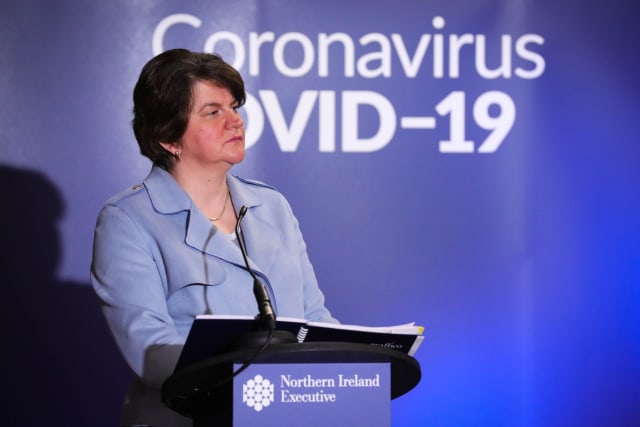 Her DUP voted against the Withdrawal Agreement in Parliament over fears Northern Ireland’s economic place in the UK internal market would be compromised by the protocol.

Mrs Foster said: “These objectives must be unmovable foundational positions for the UK Government.

“Within this plan it will be important to ensure that these objectives are achieved in a manner that does not saddle individual Northern Ireland businesses with further costly administrative burdens and in particular that the flow of goods from Great Britain into Northern Ireland are not mired in processes that delay supplies and add costs to consumers in Northern Ireland.”

The Sinn Fein Brexit spokesman, South Down MP Chris Hazzard, said the Northern Ireland protocol of the Brexit Agreement should be implemented in full.

“It is clear the British government is planning for border control posts and checks at ports of entry in the North for agri-food goods coming from Britain and elsewhere outside the EU.

“It again highlights the fork-tongued approach the British government have adopted through all of this: using Brexiteer rhetoric and bluster while at the same time accepting it will develop border posts at ports.”

Aodhan Connolly, director of the Northern Ireland Retail Consortium which represents large traders including supermarkets, said many questions had been left unanswered.

“Both sides must realise that this is not simply an economic issue, this is a standard of living issue for thousands of families across Northern Ireland.

“Northern Ireland household discretionary income is only half the UK average and we are already in very uncertain times.

“We need the UK and EU to agree a way to avoid extra costs on the food on our tables and the clothes on our backs.”