Duke of Cambridge’s call ‘highlight of tough year’ for charity 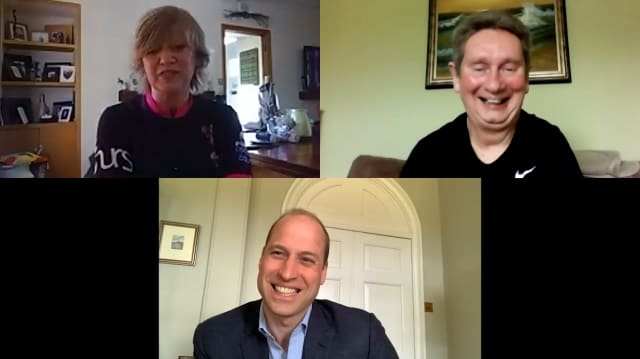 A charity that received a special video call from the Duke of Cambridge has described the moment as a “highlight of a tough year”.

The Earl of Strathearn, as he is known in Scotland, had expected to be north of the border this week before the coronavirus pandemic hit.

He spoke to Corinne Hutton, founder of Paisley-based Finding Your Feet, and one of its beneficiaries.

Support from the National Emergencies Trust (NET) Coronavirus Appeal and Foundation Scotland at the beginning of the pandemic allowed the charity to adapt its physical and emotional support to amputees by providing online and telephone counselling.

Ms Hutton said: “Firstly, the emergency funding from NET distributed by Foundation Scotland was a lifeline for the charity at a tough time and I would encourage other organisations and groups to apply.

“The money allowed us to adapt our services for online and over the phone delivery, ensuring that no amputee in Scotland would have to cope alone during this pandemic.

“As if that wasn’t enough, to be told that Prince William would like to speak to us was just breathtaking.”

She added: “The fact that he has recognised and acknowledged the work we are doing and why it’s important is such incredible motivation.

“He listened carefully and had a genuine interest in what we do to help the amputee community. We also had a bit of a laugh and a good chat.

“It’s been the highlight of a tough year and I cannot thank all involved enough.”

William also spoke to workers at the PEEK Project (Possibilities for Each and Every Kid) which has been making around 300 meals a day for children with a special food truck.

He spoke to the charity’s chief executive Michaela Collins and community chef Charlie Farrally about the work they have been doing to deliver healthy food to families during the lockdown – 90% of whom qualify for free school meals.

“We were on the call for a good half hour just speaking about PEEK and what we do in a normal basis pre-Covid crisis as well as the response and the plans for the future.”

She added: “He got the chance to have a wee sneak peek into what we’re currently doing in terms of cooking healthy meals and our well-being packs and arts and crafts for families and children across Glasgow.

“We were chatting about that importance of healthy cooked meals as well – with the schools closed it’s a really difficult time for our families as well.

“Him coming from a parents’ point of view, he sees the importance of kids getting good nutrition for their health and well-being.”

William was due to be Lord High Commissioner to the General Assembly of the Church of Scotland this week but the event was called off as part of social restrictions to help prevent the spread of Covid-19.

Ahead of Easter Sunday the Duke wrote to the Right Reverend Colin Sinclair, the now-former Kirk moderator, praising how the Church of Scotland has “reinvented itself” in the wake of Covid-19.

He would have made opening and closing addresses at the Assembly before hundreds of attendees as well as meeting Rev Sinclair and his successor Rev Dr Martin Fair, who was installed in a special online service on Saturday.