Checks on goods entering NI will be kept to minimum post-Brexit, ministers vow 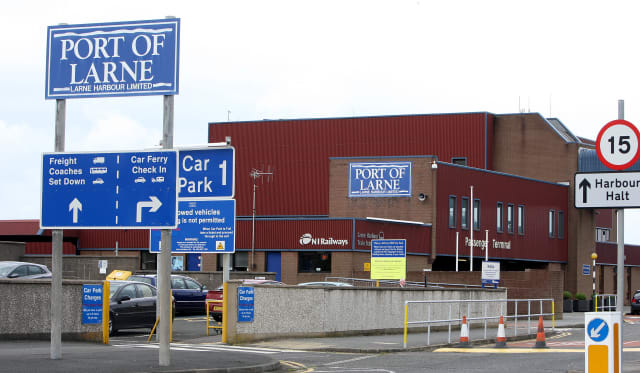 Processes on goods moving from Great Britain to Northern Ireland will be kept to an “absolute minimum” following the end of the Brexit transition period, the UK Government said.

Some “checks” supported by electronic processes will be needed on agri-food movements from Great Britain, building on what is already happening at ports like Larne and Belfast, ministers acknowledged.

Implementation of rules designed to keep Northern Ireland’s land border with the Republic and the EU’s internal market free-flowing will not involve new customs infrastructure, a document published by the UK Government on Wednesday added.

There will be no tariffs on goods remaining within the UK customs territory under a position adopted by Britain for negotiation with the EU.

Businesses in Northern Ireland will have “unfettered” access to sell goods to the rest of the UK market under the plan.

The Northern Ireland protocol was drawn up as part of the EU Withdrawal Agreement with Brussels, and the paper published on Wednesday elaborates on how Britain intends to implement it.

It says: “Some checks will be needed, supported by relevant electronic processes, in line with the island of Ireland’s existing status as a single epidemiological unit, building on what already happens at ports like Larne and Belfast.

“What the protocol does not do is create – nor does it include any provision for creating – any kind of international border in the Irish Sea between Great Britain and Northern Ireland.

“That means its provisions must entail the minimum possible bureaucratic consequences for business and traders, particularly those carrying out their affairs entirely within the UK customs territory.”

The Northern Ireland part of the Brexit deal is supposed to be implemented even if a trade agreement cannot be struck with the EU before the end of this year.

Businesses in Northern Ireland are expecting to undergo checks on goods being brought in from the rest of the UK.

That is because the country will continue to follow the EU’s rules on goods.

Northern Ireland is expected to continue to enforce the EU’s customs codes at its ports to preserve the free-flowing Irish border; the Republic is its nearest EU member state.

The UK Government has said it will develop border control posts (BCPs) at Northern Ireland’s ports.

Wednesday’s document added: “There will be unfettered access for Northern Ireland’s producers to the whole of the UK market and this will be delivered through legislation by the end of the year.

“No tariffs will be paid on goods that move and remain within the UK customs territory.

“Implementation of the protocol will not involve new customs infrastructure – with any processes on goods moving from Great Britain to Northern Ireland kept to an absolute minimum so that the integrity and smooth functioning of the UK internal market is protected.”

European Commission priorities include procedures and formalities in Northern Ireland for goods traded with Great Britain involving live animals and agri-food due to its strict rules on entry into its single market.

It has said discussions on the EU’s presence in Northern Ireland need to be advanced as a matter of urgency.

The British Government has disputed any need for a permanent office.