Captain Tom Moore ‘overawed’ by news he will be knighted 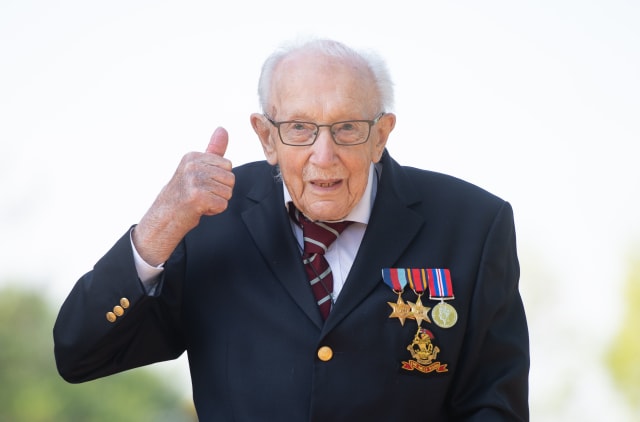 Captain Sir Tom Moore said he was "overawed" to learn that he will be knighted after raising almost £33 million for the NHS by walking laps of his garden.

He completed the laps ahead of time and his determination captured the public imagination.

Almost £33 million had been donated to his JustGiving page before it closed on the evening of his birthday.

With Gift Aid, the total stands at almost £40 million, the BBC reported.

Sir Tom told BBC Breakfast that his first reaction on receiving news of his knighthood was: "I thought: 'This can't be true.'

"I've always said: 'This won't happen', and now it appears it actually has," he said. "But I certainly was never anticipating that that letter would arrive for me.

"I'm certainly delighted and I am overawed by the fact that this has happened to me."

He joked that he hopes the Queen is "not very heavy-handed with the sword as by then I might be rather a poor old weak soul".

Prime Minister Boris Johnson said Sir Tom "provided us all with a beacon of light through the fog of coronavirus".

He recommended that Sir Tom be exceptionally honoured by the Queen, who has approved the honour, Downing Street said.

An investiture ceremony will take place at a later date, and his official title will be Captain Sir Thomas Moore.

Sir Tom said he walked the laps of his garden in the village of Marston Moretaine in Bedfordshire "with pleasure and without any hardship because as it got on and on the funds got better and better and it just went on and on".

He added: "It was absolutely totally amazing because not only was it in this country but it seemed to go throughout the world.

"It seemed to have raised the spirits of so many different countries, which was absolutely amazing and to me it was delightful."

Addressing the public, he said: "Thank you very much to all of you.

"You have been so generous and the cause has been such a good one.

"I really do thank you from the bottom of my heart because you have been absolutely outstanding.

"Never ever did I anticipate that I should get such kindness from so many people and thank you all very much."

His daughter Hannah Ingram-Moore said: "We are in a wonderful golden bubble of joy just now, we really are."

Sir Tom recorded a charity single with Michael Ball, with their cover of You'll Never Walk Alone reaching number one.

Ball said he "couldn't be more thrilled" that Sir Tom will be knighted.

Sir Tom, who is a fan of both Formula One and cricket, received well-wishes from Lewis Hamilton who said the knighthood was "so well deserved".

Sir Andrew Strauss said Sir Tom had had an "incredible impact on this country over the last few weeks".