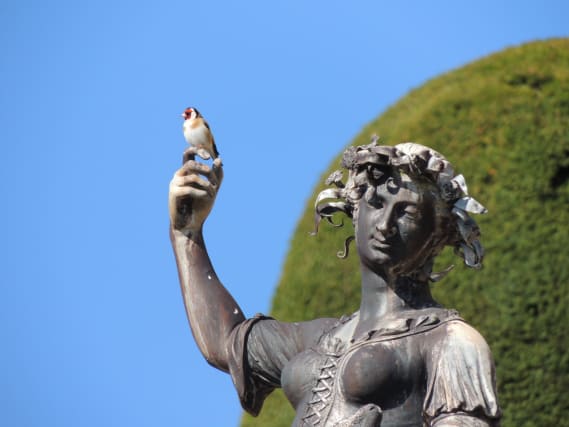 Wildlife is making itself at home in National Trust properties empty of visitors in lockdown, with some species returning to places for the first time in decades.

The National Trust closed its historic houses, castles, parks and gardens in the pandemic, and now rangers and gardeners are reporting that wildlife has become emboldened by the peace and quiet to reclaim many sites.

They include peregrine falcons nesting on the ruins of Corfe Castle in Dorset, English partridges wandering in an empty car park near Cambridge, and a cuckoo calling at Osterley in west London.

Hares, stoats and weasels have come in from woodland to explore the normally busy gardens of Plas yn Rhiw, on the Llyn Peninsula, while otters at Mount Stewart in County Down, have come from the lough to explore the lake in the grounds of the neo-classical house.

And in Norfolk, a buzzard got as far as the orangery at Felbrigg Hall, where it was spotted tucking into its lunch.

Gardeners at Ham House in London have noticed little owls venturing further into the garden from nearby river meadows and curlews have been heard in normally-busy spots in the Peak District.

Badger cubs have been caught on camera exploring Mount Stewart estate in Northern Ireland by daylight and a pipistrelle bat has been recorded making itself at home in a deserted Lake District car park.

Even flowers such as bluebells and wood anemones are enjoying the lack of disturbance, the Trust said.

Not all creatures appear to have enjoyed the lockdown, though, with peacocks at Powis Castle in Wales now following the gardeners on their rounds in the absence of visitors.

And jackdaws which are valued at Ham House for their appetite for eating box moth caterpillar, and also enjoy feeding on scraps of food dropped by people, have not returned to the historic property since lockdown started.

David Brown, National Trust ecologist at Corfe Castle, said: “With the site the quietest it has ever been, the great curtain walls are an ideal spot for these powerful birds, which look for isolated and inaccessible places to build a nest.

“Amongst all the uncertainty, it has been heartening to see nature colonising the landscape in our absence.”

Ben McCarthy, head of nature conservation at the National Trust, said: “It has only been eight weeks but wildlife seems to be enjoying the breathing space.

“Nature’s recovery is still a long way off, but the fact that people are noticing what’s around them is something to be celebrated.”

Properties remain closed, though the Trust is working on its reopening plans.

But as visitors start to return to National Trust countryside and coastal sites as restrictions ease, the charity is urging people to be careful of wildlife that has made itself at home in new areas in the lockdown.