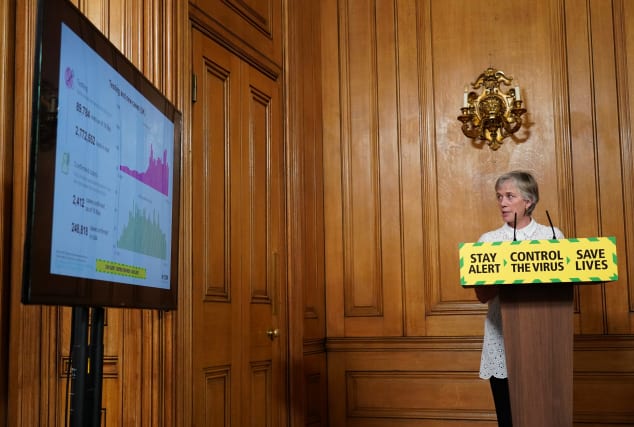 The transparency of scientific advice to ministers during the coronavirus outbreak will be a “big issue” in a future inquiry into how the crisis was handled, a top Government adviser has said.

Deputy chief scientific adviser Professor Dame Angela McLean added that she had not spent much time worrying about how secretive or not scientific advice was.

Speaking alongside her at the daily Downing Street briefing on Tuesday Environment Secretary George Eustice said the Government had been “candid” in sharing information with the public.

Their comments came after the Commons Science and Technology Committee said further transparency was needed over the provision of scientific advice, providing clear distinction between scientific advice and policy decisions.

Dame Angela said advisers had been “really, really focused” on giving high quality advice “completely rooted in evidence” not on how publicly available it was.

She added: “I have to admit I haven’t spent much time worrying about how secretive and not secretive it is.

“I can see that is going to be big issue when we have a big look back, I would be more inclined to address that then.”

Mr Eustice said he did not accept that it was secretive and added: “We have been very candid in sharing with people at every step of the way exactly what we are doing and why we are doing it an what the evidence shows.”

In a scathing summary, the Commons Science and Technology Committee identified several flaws in the Government’s Covid-19 response.

In particular, it highlighted the country’s “inadequate” testing capacity and cited how the decision to ditch community testing, in contrast to other countries which made it a tenet of their coronavirus strategies, was “one of the most consequential made” during the crisis.

However, Work and Pensions Secretary Therese Coffey deflected criticism on to the scientists advising the Government’s response.

She told Sky News: “I’ve said that we’re getting advice from the scientists, it is for ministers to decide on policy but we’ve tried to take every step of the way making sure that we listen to the science, understand the science and make decisions based on that.

“If the science was wrong, advice at the time was wrong, I’m not surprised if people then think we made a wrong decision.”

Responding to Ms Coffey’s comments, Downing Street signalled ministers should shoulder responsibility for controversial decisions made during the pandemic.

In a letter to the Prime Minister assessing evidence to the committee during the pandemic, committee chairman Greg Clark said Public Health England (PHE) had repeatedly failed to answer questions over the “pivotal” decision to scrap mass testing in March, before lockdown measures were introduced.