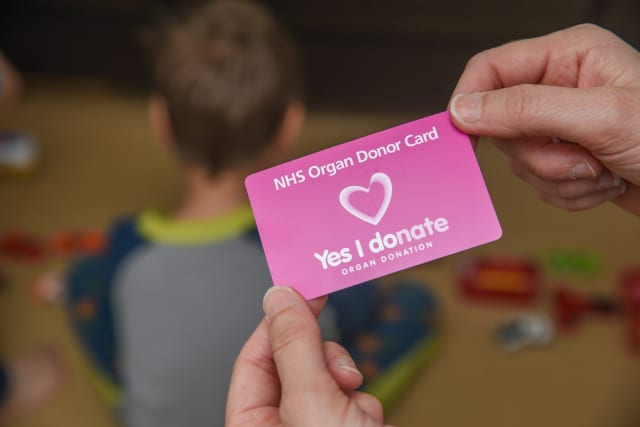 From Wednesday all adults in England will be deemed to have given consent to donate their own organs when they die, unless they explicitly state otherwise or are in an excluded group.

Although a health minister has warned that the new system could be delayed because of the coronavirus pandemic.

It has been estimated that the opt-out method, known as Max and Keira’s law, will lead to an additional 700 transplants each year by 2023.

Nine-year-old Keira Ball saved four lives, including that of Max Johnson, also nine, after her father allowed doctors to use her organs for transplants following a car crash in 2017.

Lord Bethell told peers in the House of Lords on Monday: “The legislation will come into effect on May 20, however we acknowledge that this may not come into practice straightaway due to the limitations of Covid.”

The timing of the law change amid the pandemic, when many transplants have not been able to take place due to patient safety concerns, is unfortunate but cannot be helped, said Douglas Craft, who has been on the waiting list for a kidney for two years.

He told the PA news agency: “It’s the best policy really, but it’s such a waste of organs, that’s the only trouble. If it was a safer environment it would be fine.”

Figures released by NHS Blood and Transplant (NHSBT) show the number of transplants carried out across the UK has dropped dramatically in recent weeks.

Just 99 such operations were performed in April compared with 244 in March.

NHSBT said it will take a while for organ donation to return to normal levels, but that already more potential donors are being referred and that donation and transplantation activity will increase “as it is appropriate and safe to do so, in the coming weeks and months”.

Mr Craft, 73, a retired butcher from Chichester, had a successful kidney transplant in 2000 which lasted 18 years.

He described that operation as having changed his life “immensely”, allowing him to see his grandchildren grow up, and he is now hopeful another match might come up when transplants in his area are able to resume.

Of the new law, he said: “I’m hoping it’s going to be a change for the better, giving more transplants for everybody.

While even with the new law there will still be an element of choice, Mr Craft said he hoped there will come a time when donating organs is “taken for granted that it’s just part of living and dying”.

Steve Burton, 58, who has also been shielding since early March with his wife in Blackpool, said while he feels  “terrified” of contacting coronavirus, the new law has given him a boost for the future.

He told PA: “It’s a game-changer now because obviously I’m looking for the gift of life from somebody, and the fact that a lot more people now are in that window for me to receive that gift, it’s only a good thing for me.”

Mr Burton, who is currently on furlough from his job at a commercial catering business, has been waiting to get the call for a suitable kidney since November, and said all he can do is be ready for when his chance might come.

He said: “When you go on the waiting list you’re basically waiting for a phone call. So you carry your mobile 24/7 and at some point over two-and-a-half years, if you’re lucky, that call comes.

“Because of corona it’s now suspended, so there are no transplants taking place in Manchester until further notice.

“I stay exactly the same, I’m still prepped and ready to go until we start again which, at the moment, no-one really knows.”

Sandra Currie, chief executive of Kidney Research UK, said with eight out of 10 people on the waiting list requiring a kidney transplant, the new law is “life-changing news for kidney patients”.

She added: “Although there are currently some significant delays and disruption to transplant operations, due to the the coronavirus pandemic, this legislation will help more transplants take place when the situation improves.”