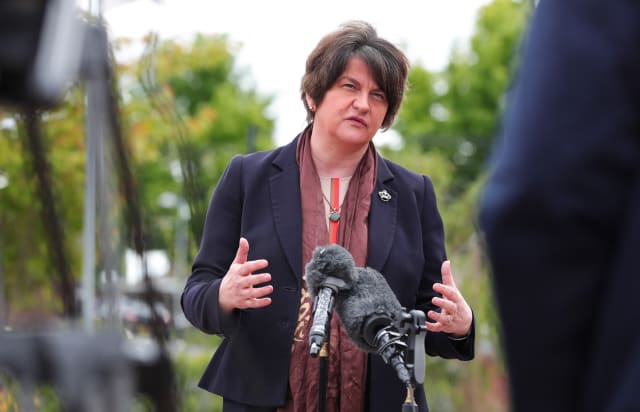 The Northern Ireland Executive is set to revisit whether people should be able to meet immediate family indoors.

A series of lockdown relaxations were announced in the region on Monday, which included groups of up to six people who do not share a household being allowed to meet outdoors.

Garden centres and recycling centres re-opened their doors and fishing restarted, while churches and places of worship are to open for private prayer and golf is set to restart on Wednesday.

Drive-in church services and entertainment will also be permitted.

Most of the moves are part of step one of the Executive’s Pathway to Recovery plan.

However, not all the relaxations included in step one have been announced, including allowing people to visit immediate family indoors, where social distancing is possible.

Mrs Foster said it had been felt that the issue should be deferred, adding she appreciates there will be disappointment.

She also told the BBC on Tuesday morning that the Executive will look again at the matter on Thursday.

“I can’t predict because I am not a virologist and I’m certainty not the chief medical officer, but I’ll give this commitment to the people of Northern Ireland, we are constantly reviewing the medical evidence behind all of this,” she told the BBC.

“We will look again at this issue on Thursday of this week.”