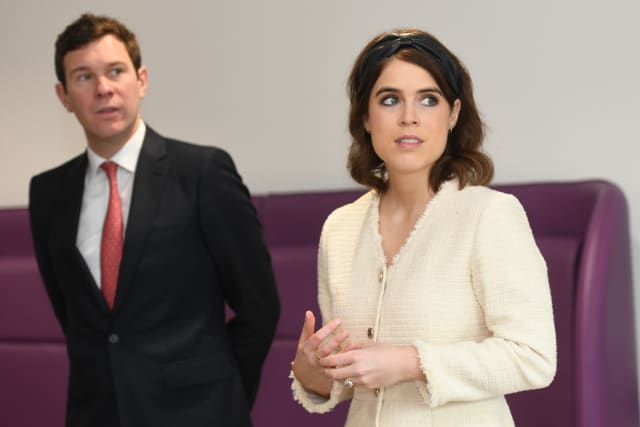 Princess Eugenie’s father-in-law has thanked NHS staff for saving his life after he was left battling the coronavirus in intensive care.

Eugenie and husband Jack Brooksbank were told more than once to “prepare for the worst” when Jack’s father George Brooksbank was put on a ventilator for five weeks.

But the 71-year-old recovered from the life-threatening bout of the illness and described his treatment as “incredible”.

Eugenie is likely to have kept her grandmother the Queen informed about her father-in-law’s health. His illness comes after the Prince of Wales suffered from Covid-19, although his symptoms were mild.

The princess and the Brooksbank family were said to be relieved after he overcame the virus and the retired chartered accountant and company director said he was making a good recovery.

“The point I really want to get across is that I think the NHS is absolutely magnificent,’ said Mr Brooksbank, who lives with his wife Nicola, 66, in Wandsworth, south London.

“The way I was treated was incredible. Nothing was too much trouble and at no point did I get a sense of a shortage of doctors or nurses or any impression that the service was in any way overwhelmed.

“There was always somebody at hand. I want to offer profound thanks to everyone who was involved. It was a real eye-opener for somebody who has not been in hospital before for any length of time.

“I certainly owe them my life.”

Mr Brooksbank, whose son Jack married the Queen’s grand-daughter in 2018, fell ill in mid-March after a trip to France and ended up being in hospital for nine weeks, said a spokesman for Eugenie’s mother Sarah, Duchess of York.

He was on a ventilator for five weeks at the Chelsea and Westminster Hospital in London.

After a tracheotomy, his condition gradually improved and he was moved to a ward at the Royal Brompton Hospital which specialised in heart and lung conditions in people recovering from Covid-19.

He then underwent a further period of rehabilitation at an institution in Roehampton.

Mr Brooksbank said he now felt “absolutely fine”, attributing his recovery to the several weeks of recuperation in hospital.

Mr Brooksbank’s wife, who also contracted the disease but is recovering at home without hospital treatment, echoed her husband’s tribute to the NHS for saving his life.

She said: “Without doubt, they saved him, and we could not be more grateful. We were not able to see him throughout his treatment and more than once we were told to expect the worst.”