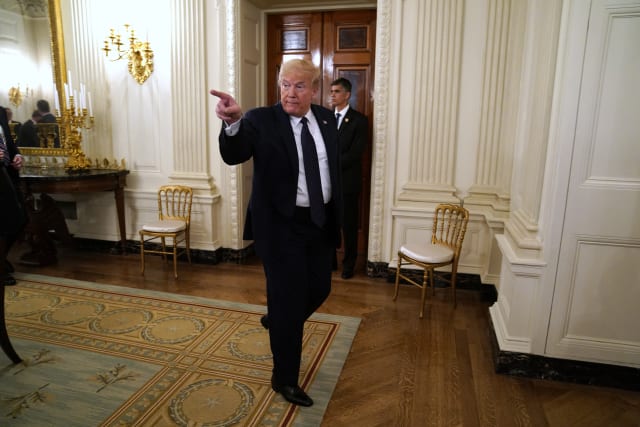 Downing Street stressed the “important role” the World Health Organisation has in tackling the coronavirus pandemic after Donald Trump threatened to permanently pull US funding.

Boris Johnson’s official spokesman also stressed on Tuesday that the UK was not recommending taking hydroxychloroquine for Covid-19 after the US president said he was taking the malaria drug.

Mr Trump admitted he was using it to protect against coronavirus, despite there being no evidence to suggest it is remotely effective and his own government warning of its dangers.

His surprise statement came before he told the WHO to commit to “major substantive improvements” within 30 days or he will make his temporary funding freeze permanent.

With the US having the highest coronavirus death toll in the world, Mr Trump has repeatedly attacked the organisation and accused the UN health body of being a “puppet of China”.

Boris Johnson’s official spokesman said: “Coronavirus is a global challenge and it is essential that countries come together to tackle this shared threat.

“The World Health Organisation has an important role to play in leading the global health response.”

He added that the UK has long advocated for reform to make the organisation more flexible and responsive but said “we have no plans to stop funding the WHO”.

Mr Trump’s threat prompted criticism from the Lancet after he cited the British medical journal in the letter to WHO director general Tedros Adhanom Ghebreyesus.

The president claimed the WHO “consistently ignored credible reports of the virus spreading in Wuhan in early December 2019 or even earlier”, including in the Lancet.

But the journal said “this statement is factually incorrect”, and accused him of “damaging” efforts to international co-operation.

In a statement, the Lancet said it did not publish a report on an outbreak in China in December, with the first coming on January 24.

Meanwhile, Mr Trump told reporters that despite having “zero symptoms” of Covid-19 he had been taking hydroxychloroquine “for about a week-and-a-half now” after requesting it from a White House doctor.

“I started taking it, because I think it’s good,” said the 73-year-old president, who previously was ridiculed for suggesting disinfectant could be injected into the body to treat the virus. “I’ve heard a lot of good stories.”

However, the US Food and Drug Administration last month warned health professionals that regulators had received reports of heart rhythm problems, including deaths.

The PM’s spokesman was moved to say that using hydroxychloroquine for coronavirus is “not something which our own medical experts are recommending”.

Asked whether Mr Trump was setting a bad example, the spokesman said: “I can only set out what the UK’s advice is. It’s not something that we recommend doing.”

Sir David King, a Cambridge University professor who was chief scientific adviser to the UK Government, was clear on what he thought of Mr Trump’s approach to science.

“I think he speaks from the top of his head and every word he says should be ignored in terms of advice,” Sir David told ITV’s Good Morning Britain.

“I’m sorry but this is not the pronouncements of a person who is listening to the scientists. He is making it up as he goes along.”