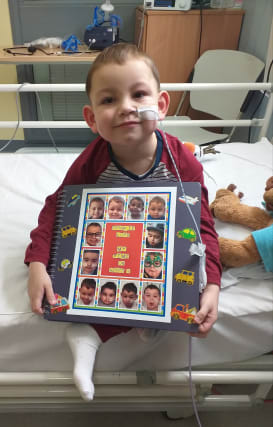 The parents of a little boy who has had two transplants and needed life-saving surgery when he was a minute old have welcomed new organ donation legislation.

But five-year-old Frankie Lord’s mother Sophie Mansuy said parents of child donors would still need to make the difficult decision to consent, as the law change will not affect under-18s.

Frankie, from Lemington, Newcastle, was born with a serious heart condition and needed surgery immediately after he was born.

Months later he was diagnosed with heart failure and was eventually put on the urgent transplant list.

A donor heart became available and Frankie was given the gift of life, but the anti-rejection heart medication he needed damaged his kidneys and he needed dialysis three times a week.

Frankie underwent a kidney swap after his father Chris was found to be a match.

Ms Mansuy welcomed the new legislation, saying: “Ten years from now, I hope the shortage of organ donors will be a distant memory.

“I remember the day that I was told Frankie was in complete heart failure and needed a new heart. Lots has happened since then, but that memory is one I’ll never forget.

“The chances of Frankie receiving a donor heart were slim. Not only because Frankie was small and underweight but because not many people, understandably, choose to donate their child’s organs once they’ve passed away.

“The new laws that are coming in are great as people will start to talk about organ donation more, but when it comes down to parents donating their children’s organs it really is 10 times trickier.

“Before I had Frankie, my mum always said that she wanted to donate her organs and it really used to scare me. Thinking about her not being here and someone else having a part of her.

“But then reality hit me when my son needed a heart and I found myself waiting to see if a family would make that really difficult decision.

“I never thought it would happen to me, but it did.”

The family has been helped by The Sick Children’s Trust, a charity that supports relatives of young transplant patients by giving them a place to stay close to the children’s ward.

Chief executive Jane Featherstone said: “Every day at The Sick Children’s Trust we meet families like Frankie’s who are facing the agonising wait for the news that an organ has become available for their child.

“Until more awareness is raised around organ donation for children The Sick Children’s Trust promises to be there for these families, giving them a comfortable place to stay just minutes away from their child’s hospital bedside.”