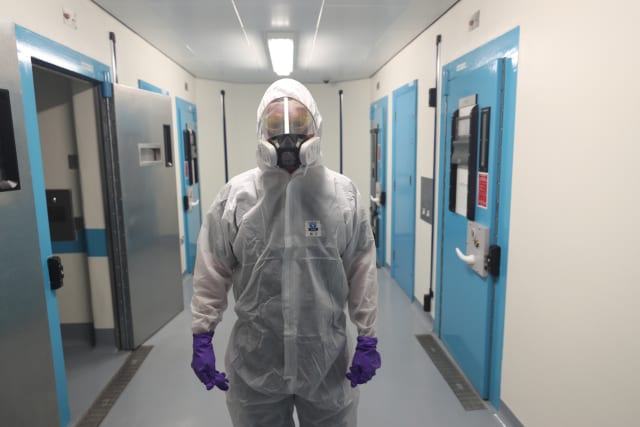 Northern Ireland’s specialist Covid-19 custody facility has detained more than 50 alleged offenders with coronavirus or its symptoms since the outbreak began.

The sealed-off 10-cell block in Musgrave Street police station in Belfast has been in operation for two months. As of the start of this week, 53 people have been held there.

Any arrested person in Northern Ireland who has coronavirus or is displaying symptoms of the virus is transported to the facility by adapted Covid-19 mobile response vehicles based at nearby Antrim Road station.

PA Media was given exclusive first access to the Covid-19 block to witness how the Police Service of Northern Ireland (PSNI) has adapted to the challenges of custody in a pandemic.

As the region’s biggest custody facility and the only one with an embedded nurse-led healthcare team, Musgrave Street was the obvious choice to house the block.

It has been operational at a time when overall arrest rates have fallen quite sharply due to the lockdown. In the first few weeks of the restrictions, Musgrave Street saw the number of detainees fall by 44%.

Opening on March 17 as the outbreak was taking hold, the Covid 19 block is on a different floor to the cells where non-symptomatic detainees are held and is subject to strict infection control measures.

It is the same level of PPE worn by the officers in the mobile units that transport alleged offenders to and from the facility in Belfast city centre.

Chief inspector of Musgrave Street custody suite, Peter Brannigan, said his team has had to adjust to some fast-paced changes.

“It’s been quite a dynamic environment, something that we couldn’t have prepared for, but we have responded to it quite effectively and dynamically,” he said.

“Whilst the custody process itself hasn’t changed, how they deal with a detained person has.”

Mr Brannigan said staff have had understandable fears about working in an environment where Covid-19 is present.

He said he hoped some of those had been addressed with regular communication of key health and safety messages from commanders.

“People are concerned, people are frightened and people want to be reassured,” he said.

The senior officer also reflected on the impact of incidents involving officers out on the beat who have been coughed at or spat at by people claiming to have Covid-19.

“It generates panic right away in terms of the police officer, you know they’re human beings at the end of the day, doing a job,” he said.

Since March, officers have been issued with spit and bite guards to deal with such situations.

Mr Brannigan said the fall in overall arrest numbers does not tell the whole story.

He said an increase in the threshold for arrest and a drop-off in lower level crimes associated with the night-time economy meant a high proportionate of detainees were being held for more serious offences.

Suspects who are due before a judge also now appear via video-link from Musgrave Street, in an effort to reduce footfall through the region’s courts – meaning the detainees are also spending more time in police cells.

“So the level of staff work hasn’t actually decreased, even though the prisoner numbers have done, so it’s a different working environment,” said the chief inspector. “Numbers don’t always tell that story.”

The creation of the Covid-19 block is only one of a series of infection control measures introduced at Musgrave Street.

Communications networks and equipment have been improved to enable solicitors to conduct remote consultations with their clients and police doctors are also now able to perform remote assessments via iPads.

Perspex screens have been installed throughout the facility, most notably in interview rooms to divide detectives from the suspects they are questioning.

The PSNI has completely reconfigured its custody accommodation across the region to reflect the lower arrest rates during lockdown.

It has consolidated operations in five suites. As well as Musgrave Street, Strand Road in Londonderry, Lurgan, Omagh and Antrim remain open.

“At times, custody detention officers or custody sergeants must interact with detained persons,” she said.

“We do have all of the personal protection equipment available for any of those interactions, and that is from the basic interaction where gloves and masks are required right up to full PPE if we’re dealing with a symptomatic person.”

Ms Williamson said adapting to the new Covid-19 operating environment has been one of the most significant challenges the organisation has faced.

“We have put systems into place within weeks that would normally possibly take months or even longer.

“But I would say it’s been a successful one from a policing perspective, in terms of how we faced it and how we’ve adapted and made those changes both on the front-line and organisationally.”