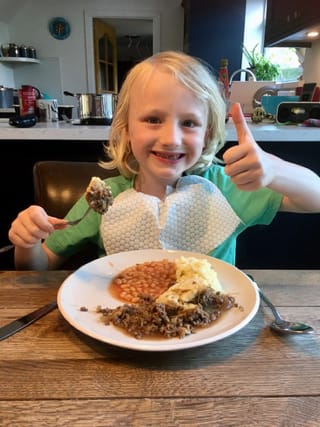 A schoolboy wrote to his headteacher asking for the recipe for his favourite school dinner when his father’s lockdown attempt at mince and dumplings failed to come up to scratch.

Arthur Dawson, eight, has been missing his lunches at Langley First School in Whitley Bay, North Tyneside, since it closed due to the coronavirus.

He wrote to headteacher Tim Jones, pleading for help, and the letter did the trick as Mr Jones contacted the catering team at North Tyneside Council who shared their secrets.

In the handwritten note, Arthur said: “Dear Mr Jones, I have missed you. But what I have missed most is the dinner ladies’ mince and dumplings.

“It’s the best food ever. Please can we have the secret recipe for mince and dumplings.”

Arthur did not spare his father’s blushes over his one attempt at recreating the dish, describing it as “very bad”.

He said: “It most definitely put a smile on my face reading it, especially as I can imagine him telling his dad exactly what he thought of his home-made version.”

Arthur’s mother, Dawn, said her husband, Antony, has since used the school recipe and had much better results.

She said: “Arthur loved making this meal with his daddy … and it turned out to be really, really tasty.

“When Antony last tried to make this, it did not pass Arthur’s exacting standards. It was not as good as the school’s.

“This time, though, Arthur loved it and gave it the thumbs-up. We’ll be making it again next week.”