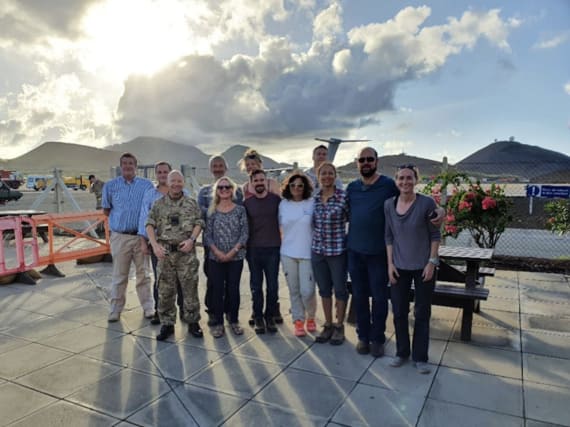 When the list of destinations requiring repatriation missions to the UK was being drawn up, it is unlikely Gough Island was near the top.

But now, almost two months after Foreign Secretary Dominic Raab urged Britons to head home, a group of Royal Society for the Protection of Birds (RSPB) conservationists on the remote island in the South Atlantic Ocean have finally completed the mammoth journey back.

The dozen had arrived on Gough Island – which is part of the British Overseas Territory Tristan da Cunha, and about 1,700 miles west of Cape Town in South Africa – at the end of February to begin a restoration programme saving endangered seabirds being eaten by giant invasive mice.

But as coronavirus lockdown measures across the world saw international borders close around them, the group were forced to undertake an unorthodox, complex and lengthy journey home.

After weeks of planning, they were eventually able to secure a route via Ascension Island, a 12-day journey of 1,969 nautical miles north through rough seas, before getting on an RAF flight back to the UK.

Kate Lawrence, who was among the RSPB group, said: “Sailing in that boat for 12 days, looking at the endless blue ocean around me, made the world feel quite big, in contrast to the previous ease of air travel and the rapid spread of Covid-19, which makes the world seem so small.”

Most of the group had planned to spent a year on Gough Island before the project was postponed.