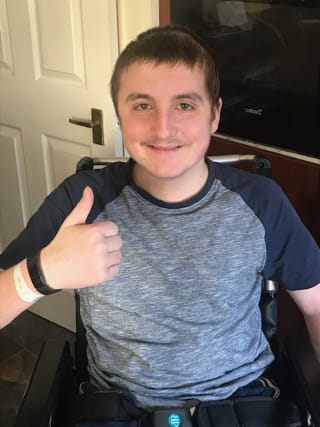 A teenager has completed a marathon after having surgery and former prisoners have been sewing face coverings, in Monday’s news.

A Roman Catholic priest in a US city is using a water pistol in a bid to maintain social distancing during the Covid-19 pandemic.

Photos posted on social media by St Ambrose Church in Detroit show Father Tim Pelc shooting holy water into a car window as it stopped by the steps of the church.

He wore a mask, face shield and rubber gloves as further precautions against spreading coronavirus.

The photos of the priest at the church in Grosse Pointe Park have inspired memes online.

One shows the 70-year-old priest amid the fires of hell directing the water pistol at devil-like figures.

A teenager who was told he may never walk again after a rare brain infection has completed a marathon in six days to raise money for the hospital that saved his life.

Despite a “long and difficult journey” to regain his movement, he took his first steps six weeks ago and has continued to take part in physiotherapy sessions over video calls after the coronavirus outbreak meant he could no longer attend in person.

Lucy Warnes, Ben’s mother, said her son wanted to “give something back” to the hospital for their “outstanding” care and decided to walk the length of a marathon over six days – raising £1,674 for the Children’s Hospital Charity.

The money raised will go towards helping the hospital during the coronavirus pandemic and beyond.

A group of ex-offenders have gone from sewing mail bags to stitching masks as part of a massive national effort to meet the growing demand for face coverings.

The sewing circle run by a charity for former prisoners at Haworth House, a hostel run by the Probation Service in Blackburn, began sewing face coverings with fabric donated by Scottish fashion designer Patrick Grant.

Grant, a judge on BBC TV’s The Great British Sewing Bee, has launched #BigCommunitySew, a national effort to provide free face coverings for all.

The group joined more than 100 Women’s Institutes, community groups and “scrubhubs” across the nation all sewing DIY face coverings.

– Covid snakes: The craft projects bringing communities together in lockdown

Communities are coming together by creating ever-lengthening “snakes” out of painted rocks in public spaces.

The rocks are painted with colourful designs and laid end to end to resemble a snake, with anyone free to add one to the end, creating a giant craft project for communities to take part in together even though social distancing measures mean they are not allowed to congregate.

Faye Rose, who started a “Covid snake” in Heyford Park, near Bicester in Oxfordshire, said the project has been embraced by people in the village.

“It’s something nice for the whole community to come together,” she told the PA news agency.

Similar projects are springing up all over the country, with new snakes appearing over the past few days in Pontefract, West Yorkshire, and Shrewsbury, Shropshire, among others.

Mrs Rose was inspired by a similar project in nearby Abingdon, which was started by her sister, Holly Barrett, and her seven-year-old daughter Mimi.