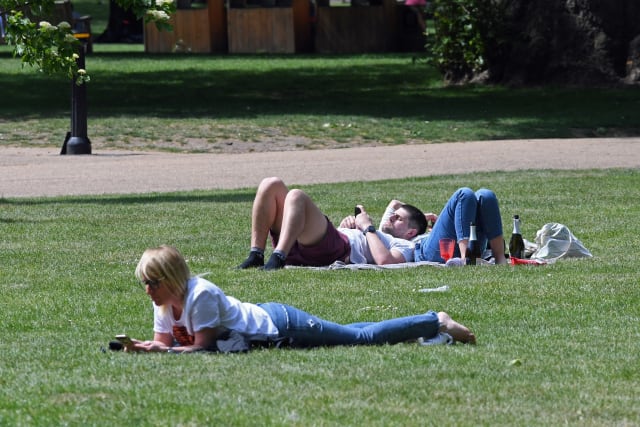 Outdoor gatherings of up to six people who do not share a household have been given the go-ahead in a significant scaling back of Northern Ireland’s coronavirus restrictions.

Golfers will be able to return to fairways, but members of the same family will have to wait longer to see loved ones indoors, due to the heightened risk of virus spread.

She said: “They have been hard-won freedoms.

“It is vital that when you exercise those, you do it in a way that does not put anyone else’s safety at risk.”

She said as they moved through the lifting of restrictions, they would proceed cautiously, allowing them to open more freedoms in due course.

Stormont ministers rubber-stamped the changes on Monday and they are expected to become law imminently.

– Allowing drive-in religious services as long as people remain in their cars.

– Cinemas, concerts and live theatre with audiences staying in their vehicles.

– Golfers can return to fairways.

– Outdoor gatherings of up to six people from outside the same household.

– No indoor gatherings of family members.

She said ministers were still considering the matter of small weddings.

The First Minister said: “The relaxations I have announced have been made possible, and on this I will finish, by the vast majority of you faithfully following the public health advice on self-isolation, on shielding, on social distancing and on limiting your activities in public and washing your hands thoroughly.”

Ministers have tried to balance the need to curb spread of disease with the desire to minimise harm to the economy and relieve suffering caused by social isolation.

Deputy First Minister Michelle O’Neill told the Stormont daily news conference: “When we can show that compassion, whenever we can move on these things, then of course we will move on, then we will not hold down the restrictions for longer than necessary.

“We want to let the people at home know that we are acting in everybody’s best interests.”

Some responsibilities for enforcing the restrictions have been shifted to local councils, after senior police expressed disquiet.

People queued for hours on Monday as recycling and garden centres opened their doors for the first time in weeks.

Gary Stoops said: “We’ve a lot of rubbish to offload after lockdown, we have redecorated a room and cleared out a room. We’ve travelled about 300-400 yards in an hour and 20 minutes in the queue.”

Anglers took to lake banks, while those with terminal medical diagnoses planned marriage ceremonies as restrictions were relaxed.

Alan Chowney is honorary secretary of Belfast Anglers Association. The club is the oldest in Ireland and celebrates its 132nd birthday this year.

He said: “It makes an awful difference.

“It gets people out of the four walls of their house which they have been looking at for quite a long time.”

Six more deaths related to Covid-19 were reported by the Department of Health on Monday, bringing its total to 482.

The total number of confirmed outbreaks in care homes is 71, with a further 33 suspected outbreaks, the department confirmed.

The health authorities said coronavirus testing would be offered to all care home residents and staff, including those with no positive tests, in a vulnerable sector which has seen more than 100 confirmed or suspected outbreaks and many fatalities.