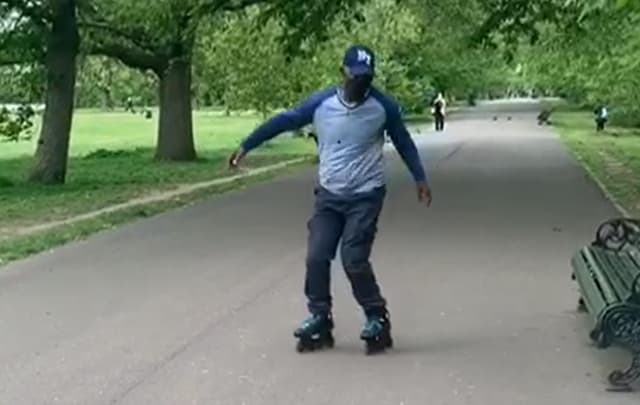 A father of four has returned to his hobby of rollerskating two weeks after leaving hospital where he was given life-saving treatment for coronavirus.

Clayton Jean-Charles, 55, a plumber from Greenwich, south London, was taken to University Hospital Lewisham on April 11 after experiencing symptoms of Covid-19, including a high temperature, sore throat and shortness of breath.

He was initially admitted to a ward and given oxygen, but was moved to the intensive care unit when his condition worsened, and put on a continuous positive airway pressure (CPAP) machine – a non-invasive treatment which involves air being delivered through a tight-fitting face mask.

After almost three weeks in hospital, Mr Jean-Charles, who has four daughters aged between 20 and 36, was able to go home on April 29 to his wife Barthola.

Within a fortnight, he was able to go rollerskating in Greenwich Park, a hobby he took up about a year ago.

Mr Jean-Charles said: “There were two things that really kept me going while I was in hospital – wanting to see my family and four girls again, and the encouragement of all the staff.

“They all worked so hard, and treated patients with such compassion and care, it was so inspiring. I cannot describe how amazing the staff were, and am welling up a bit just thinking about it.

“It was a life-changing experience to witness the grace, kindness and understanding of all the doctors, nurses, physios and other healthcare staff. I looked forward to seeing them every day and they were so positive and caring.

“I still have a bit of a way to go to get back to full health, the fact that I was well enough to go rollerskating in the park less than two weeks after being discharged shows how much better I am.”