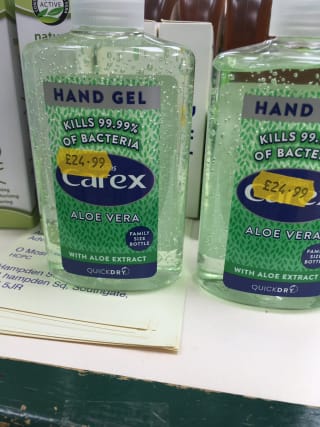 Competition watchdog officials have advised the Government that without emergency laws they will find it harder to crack down on unscrupulous businesses trying to cash in on the Covid-19 crisis.

The Competition and Markets Authority (CMA) previously said it received nearly 21,000 complaints from the public between March 10 and April 19 over retailers and businesses trying to rip off shoppers.

There were also complaints from consumers who were struggling to get refunds processed by travel companies.

But with lawyers concerned that the current legislation does not go far enough, the CMA has advised the Government the introduction of “emergency time-limited legislation” will help, according to the Financial Times.

Chief executive Andrea Coscelli said he had spoken to the Department for Business, Energy and Industrial Strategy (BEIS) asking for a change.

The CMA insist he was not “asking” for a change but “advising” on outcomes and declined to comment on whether or not it wanted new laws.

Mr Coscelli told the FT: “Consumer and competition law are not really designed for emergencies.

“Part of our role is to use everything we have but if there are gaps, to explain to the Government what those gaps are. Ultimately though it’s for the Government and Parliament to decide.”

A CMA spokesman told the PA news agency: “Along with our existing powers, we have also advised the Government on options for emergency time-limited legislation that could give a better chance of dealing with this type of problem.”

A Business Department spokesman did not rule out a legislation change. He told PA: “We are facing a health emergency and nobody should be seeking to exploit that for financial gain.

“The vast majority of businesses are acting responsibly during the national effort to tackle Covid-19 and reports of profiteering to the Competition and Markets Authority have fallen.

“The CMA deals directly with firms to address any complaints and we continue to keep the issue under review.”

Since then, the CMA has written to 187 businesses following 2,500 complaints relating just to those firms.

But with retail stock supplies returning to normal levels, the watchdog said four out of five complaints are now related to consumers struggling to get refunds for cancelled events.

Shoppers have reported some shops inflating prices, with some pharmacies charging over the odds for sanitiser and toilet rolls.

However, many small businesses say they are being ripped off by suppliers who have upped their prices too.

The CMA said it is also looking at the behaviour of manufacturers and wholesalers over their charging policies during the lockdown.

Mike Ashley’s Sports Direct risked becoming one of the biggest casualties of the CMA’s new probe, after it was revealed that staff had been ordered to increase prices on home fitness equipment the day after the Government announced the lockdown.

But with retail settling, the next problem comes for customers desperate to get refunds on holidays, weddings and events planned through the summer.

Airlines and travel agents, such as Lastminute.com, are trying to hand out vouchers in lieu of cash to thousands of passengers who are unable to travel, despite many wanting their money back as the economy takes a hit.