Covid snakes: The craft projects bringing communities together in lockdown 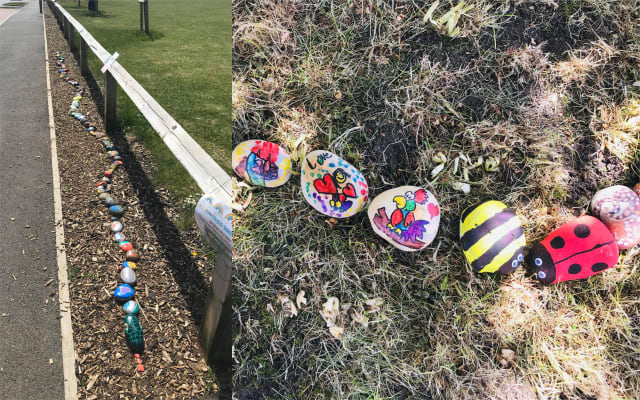 Communities are coming together by creating ever-lengthening “snakes” out of painted rocks in public spaces.

The rocks are painted with colourful designs and laid end to end to resemble a snake, with anyone free to add one to the end, creating a giant craft project for communities to take part in together even though social distancing measures mean they are not allowed to congregate.

Faye Rose, who started a “Covid snake” in Heyford Park, near Bicester in Oxfordshire, said the project has been embraced by people in the village.

“It’s something nice for the whole community to come together,” she told the PA news agency. “Children are getting excited by it because every day they can walk round and look at everybody’s designs.”

Mrs Rose’s snake has grown to around 100 stones, painted mostly by local children.

She said: “The designs completely range – some are really intricate and some you can tell have been done by very small children, so it seems like adults and children are all getting involved in it.”

Similar projects are springing up all over the country, with new snakes appearing over the past few days in Pontefract, West Yorkshire, and Shrewsbury, Shropshire, among others.

Mrs Rose was inspired by a similar project in nearby Abingdon, which was started by her sister, Holly Barrett, and her seven-year-old daughter Mimi.

The Abingdon snake, which is outside the town’s fire station, has its own Facebook page and is growing every day. By Monday afternoon it contained more than 150 rocks.

“We go out every day to check how far we’ve got,” Ms Barrett told PA.

Among the designs are fruit, flowers and people’s names – as well as a number of stones painted in honour of the NHS.

“Everyone wants to say thank you to the NHS at the moment for all the hard work they’re doing with coronavirus,” Ms Barrett said. “I think it’s a nice way to say thank you.”

The snakes also give parents, who may be struggling to think of new activities to do under lockdown, a project to undertake with their kids.

“It’s nice in the afternoon after school work to be able to sit down and do something arty with them but still engage with them so they’re not just stuck on their iPads,” she said.

“I think it’s actually a bit of therapy for us parents as well – it’s very therapeutic.”