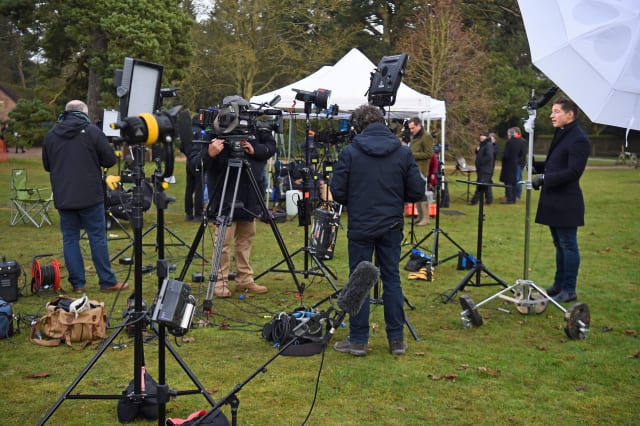 A host of major UK broadcasters have joined forces to introduce broad guidelines which aim to help the TV industry work through the coronavirus pandemic.

ITV, the BBC, Sky, Channel 4, Channel 5 and ITN are among those to have jointly published the document.

The guidance is intended to “enable a return to production for the television industry”, according to a statement.

Culture Secretary Oliver Dowden said: “Great British television is keeping us company throughout the crisis, and I’m keen to get cameras rolling as soon as it is safe.

“Our creative industries are Britain’s global calling card and this is a significant step forward in getting our favourite shows back into production.”

The guidance includes considerations about making sure that filming locations have a large enough capacity to allow for social distancing and limiting the amount of travel that is needed.

BBC director-general Tony Hall said: “Everyone across the TV industry wants to get production back up and running.

“Recent weeks have shown just how important shows are to the public.

“But we can only move forward with the right safety measures in place.

“This guidance is an attempt to get that right.”

He added that the guidance will be kept “under review”.

Scottish broadcaster STV, the Association for Commercial Broadcasters and On-Demand Services (Coba) and trade association Pact also signed up to the guidelines.

Other measures include implementing work patterns which will enable people to work in small cohorts who do not mix with the wider group working on a programme.

Producers should also consider the mental health impact for those working on productions, according to the guidelines.

Rest areas that are used during breaks and equipment used in filming and production also need to be made safe.

The use of personal protective equipment (PPE) “is very much a last resort” and “it would not in general be appropriate to source medical-grade PPE”, the guidelines add.

There must also be special consideration for people at higher risk from the virus and for those that live with someone who is vulnerable.

Scripts and scenes must also take into account social distancing.

Channel 4 chief executive Alex Mahon said: “Unlocking the television production sector in a safe way will be vital to continuing to ensure we can both continue to serve our audiences and help sustain the livelihoods of those in the industry – and I’m pleased that we’ve been able to work in partnership with other broadcasters, DCMS and Pact to create this innovative new framework.”

“This requires really innovative thinking, but above all, the safety and wellbeing of all those who work on the programmes is paramount.”

The production of a number of TV programmes has been halted because of coronavirus.

However, last week the BBC’s director of content, Charlotte Moore, said in The Telegraph that the broadcaster plans “to begin filming again on both EastEnders and Top Gear by the end of June”.

Coronation Street and Emmerdale are in the “final stages” of working on plans to return to production, a spokeswoman for the ITV soaps said last week.