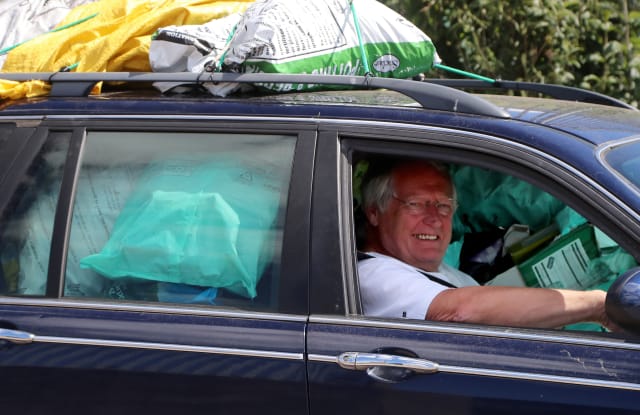 The queue for a recycling facility in Belfast started at 7am on Monday as Northern Ireland took its first steps out of the coronavirus lockdown.

Ken Mills was first in line for Palmerston Recycling Centre as a queue of cars stretched along the Holywood Road in the east of the city.

Motorists read newspapers in their cars as they waited for the gates to re-open at 9am.

“I got up this morning thinking, I’ll get on the ball here, because I knew it was going to be busy,” Mr Mills told the PA news agency.

“So I’ve had a two-hour wait, but I don’t mind because I am getting rid of a lot of stuff that has been cluttering the garage.

“It wasn’t so much from a clear-out – my daughter moved house and has been buying a lot of furniture and stuff which all comes in a lot of cardboard. She has been storing it in my garage so I had the job of getting rid of it.”

Angling is also allowed again while marriage ceremonies involving someone with a terminal illness can take place.

The relaxations came into effect as it was announced that coronavirus testing is to be offered to all care home residents and staff in the region.

The move by Health Minister Robin Swann comes after mounting calls for universal testing in homes.

Almost half (45%) of Covid-19 related deaths in the region are occurring in care homes, the most recent figures from the Northern Ireland Statistics and Research Agency (NISRA) have shown.

Stormont’s leaders are expected to announce a series of other lockdown relaxations on Monday afternoon, with the region set to formally move to phase one of its five-step exit plan.

Outdoor gatherings of four to six people from outside the same household are expected to be given the go-ahead later, as is the reopening of churches for solitary prayer and drive-in services.

The moves will all depend on the latest scientific and medical evidence.

The coronavirus death toll recorded by Stormont’s Department of Health rose to 476 on Sunday after a further three fatalities were announced.

That total primarily encapsulates deaths in hospitals, so the true toll in the region will be larger, once fatalities registered in the community are factored in.

A meeting of the Stormont executive will convene at noon as ministers discuss the latest moves out of lockdown.

First Minister Arlene Foster and Deputy First Minister Michelle O’Neill are expected to make an announcement later in the afternoon.

Ministers were told that the Covid-19 infection rate in region (R0) was below 0.7.