Nearly half of doctors fear for their health – survey 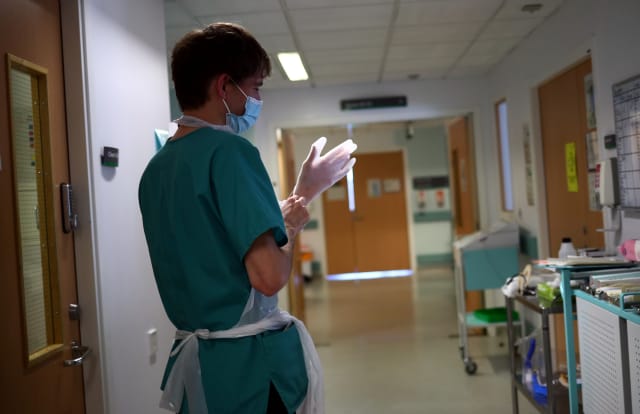 Nearly half of doctors working during the coronavirus pandemic fear for their health, a survey has found.

The Royal College of Physicians (RCP) found 48% of respondents reported feeling concerned or very concerned for their health, which jumped to 76% among those from black, Asian and minority ethnic (BAME) communities.

The survey, conducted on Wednesday, found 61% were also concerned for the health of those they live with.

The RCP said the widespread concern among clinicians reflected the reported lack of access to personal protective equipment (PPE), testing for Covid-19, and the number of staff taking time off to self-isolate.

Professor Andrew Goddard, president of the RCP, said: “It is no wonder that clinicians are worried for themselves and their families, when the very things that would keep them safe – PPE and testing – are still hard to access for so many of them.

“We need to get those who have symptoms back to work as soon as possible so they need to be tested in good time – waiting three to four days for test results at a time like this is simply unacceptable.”

A further 4% said they are unable to access testing for their patients.

Prof Goddard said: “Given that so many staff have had to take time off work during the pandemic, we welcome plans to roll out antibody tests to them as soon as possible so that we can understand whether they have or haven’t had the virus.

“Employers must do more to help and reassure staff – giving them the confidence to fit-check their own PPE should be the bare minimum.

“Clinicians are working incredibly hard in the most extraordinary circumstances the NHS has ever faced, but without the right safety measures in place, they’re still living in fear for their own health and the health of their families.

“Confidence in the system they work in is low and more must be done to regain that trust.”

The survey found some doctors were waiting days for coronavirus test results to come back, with 17% reported getting them within 24 hours, 38% waited up to two days, 20% between two to three days and 14% waited four days or more.

Some 16.5% said they were in situations where they have been unable to access PPE over the last two weeks.

Around 33% said they have not had or were not able to get testing for PPE to make sure they fit properly, while 37% of respondents said they did not feel confident fit-checking their own PPE.

NHS employers have been asked to conduct risk assessments for each of their staff regarding their personal risk of contracting Covid-19, but despite these instructions only 18% reported having had a formal risk assessment.

Meanwhile, a survey by the Royal College of Midwives (RCM) found 57% of midwives, maternity support workers and student midwives felt the current crisis has had a negative impact on their mental health.

Gill Walton, chief executive of the RCM, said: “Maternity staff are absolutely committed to continue providing safe services for women, babies and their families, and are doing an incredible job.

“However, maintaining services does also put them under immense pressure.

“It is inevitably affecting their mental health as they cope and deal with the pressures of long and extremely busy shifts.”

Of the 942 people that were surveyed, between April 21 and 28, 34% said they felt their employer was not giving them adequate support in the workplace.

The RCM is working with NHS England’s behavioural insights team on a pilot programme aimed at boosting mental wellbeing.