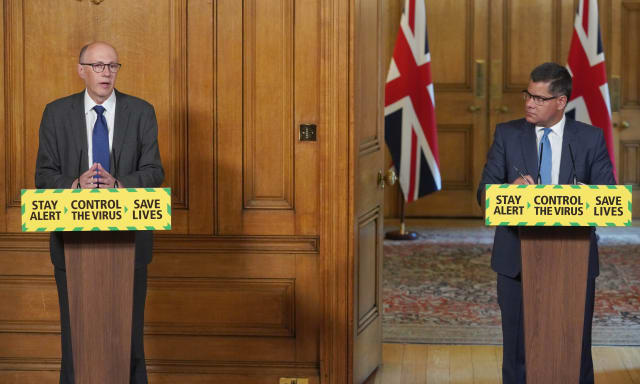 The Government will make sure all communities are represented in contact tracing despite language or cultural differences, the Business Secretary has said.

At Sunday’s Downing Street press conference Alok Sharma was asked about how the Government will consider language and cultural differences in contact tracing within the BAME community.

More than 17,000 people have been recruited to work as contact tracers after a target was set by the Health Secretary to hire 18,000 people by mid-May.

When asked about how the tracing strategy will address barriers to contact tracing in the BAME community, Mr Sharma said the Government wanted to ensure they have the right number of people.

He continued: “This is also a question of making sure that people from across all communities are able to come forward for this really vital task as well.”

The Business Secretary added: “In terms of contact tracing, I think there’s a very important point and we need to make sure that all communities are represented.”

Professor Stephen Powis, NHS national medical director for England, added it is important to include all groups with particular emphasis on “difficult to reach communities”.

He said: “I do agree that it is important that as we move to a contact tracking to a track and trace plan that gets rolled out, that it is available to all and we pay particular emphasis to those communities that for whatever reason may not always engage in track and trace.”

Prof Powis added barriers could be cultural or include issues around language but other forms existed.

He said: “There are other examples in other communities as well where there may be other barriers that need to be taken into account, so I absolutely agree that it’s important that is thought of and that we have representational recruitment so that we can effectively work with various communities.”

Mr Sharma said progress is being made on hiring enough contact tracers, which will include qualified public health professionals as well as call handlers.

“We are very much on target to make sure that we have the right number of people,” he told the press conference.

Sunday’s press conference comes after doubts and criticism of the Government’s target after it emerged only 1,500 people had been hired for the programme on May 15.

She later questioned whether 18,000 was enough to successfully carry out the task when some experts suggested up to 50,000 tracers may be needed.

Outlining the plan for the contact tracers on May 4, Health Secretary Matt Hancock said the 18,000 figure was an initial scale of what was needed but would be “up and running by the middle of the month”.