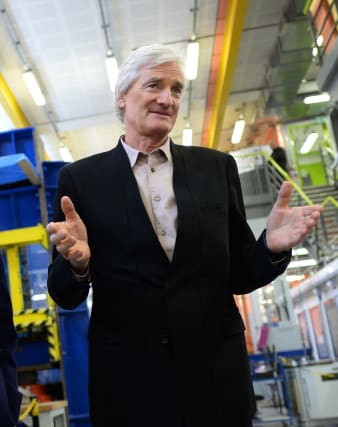 Inventor Sir James Dyson is the richest person in the UK for the first time, according to the Sunday Times Rich List.

The Brexit-backing entrepreneur saw his wealth grow by £3.6 billion over the past year, climbing to £16.2 billion.

In February, it was expected the number of billionaires would rise to nearly 160, but it fell by four to 147 as the coronavirus pandemic took hold, the Sunday Times said.

A record 25 female billionaires make the list, which also shows the overall wealth of the 1,000 richest people in the UK is down by £29 billion on last year.

– Sri and Gopi Hinduja and family, industry and finance, £16 billion.

– The Duke of Westminster and the Grosvenor family, property, £10.29 billion.

Rich List 2020: The coronavirus pandemic has wiped £54bn from the wealth of Britain's super-rich in the past two months, the Sunday Times Rich List reveals today

List compiler Robert Watts said: "Ever since the financial crisis of 2008-9, Britain's wealthiest people have become richer and richer.

"Covid-19 has called time on their golden period. This year's rich list paints a picture of Britain on the brink of calamity – two months after lockdown and already billions of pounds have been wiped out.

"You may not like the super-rich, but it is hard to deny that our economy will need the jobs they create and the taxes they and their companies pay if we are to escape a prolonged recession that causes further misery to millions."

The full list covering the wealthiest 1,000 people in the UK will be published on Sunday in a 136-page edition of The Sunday Times Magazine.