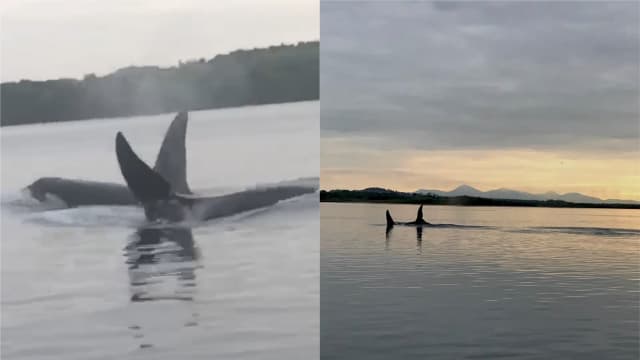 The orcas swam alongside marine maintenance worker Jeremy Rodgers’ boat in Strangford Lough, County Down, an inlet of the Irish Sea.

“That’s the third time I’ve seen them in Lough in my lifetime,” the 47-year-old told the PA news agency.

“My son and my nephew were with us and got their phones out… we were just full of excitement and stunned to see them.

“When we’ve seen them before, they always seemed to be chasing something – but these ones stayed around and were swimming around us.

“We always try to keep our distance from them, so we just sat there for a while and they came to us.”

Mr Rodgers, from Portaferry, works for Cuan Marine Services based in the town, and said the coronavirus lockdown may have created conditions for the killer whales to appear.

“There’s no boats on Strangford Lough at all, but because we’re commercial we’re still allowed to work – so that could well be something to do with it,” he said.

Suzanne Beck is a marine biologist with the Agri-Food and Biosciences Institute in Belfast and commended the rarity of the sighting.

“I’ve only managed to see killer whales once in Northern Ireland, and this has been my day job for the past 10 years,” the 34-year-old told PA.

“These individuals are from the west coast community of killer whales that range around the British Isles.

“We usually get a couple of sightings a year, so this isn’t totally unexpected, but certainly a lucky sighting.”

“The group is declining and we haven’t seen any calves in all the time we have studied them,” she added.

Ms Beck said her group’s knowledge of the community comes largely from amateur sightings reported to the Irish Whale and Dolphin Group.

She also encouraged people to visit the WiSe Scheme’s website to learn about how to be responsible when watching marine wildlife.