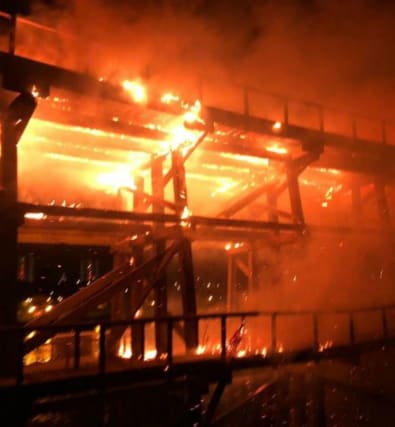 A major fire has broken out at Dunston Staiths on the Tyne – believed to be the largest timber structure in Europe.

It is thought the grade II-listed structure, opened in 1893 so coal could be loaded on to ships below, may have been deliberately targeted by arsonists.

The Tyne and Wear Fire and Rescue Service tweeted pictures from the scene overnight which showed a huge expanse of the structure engulfed in flames.

The post read: “As you can see from these photos, the fire at Dunston Staiths was extremely serious.

“If you have any information about this incident contact @northumbriapol on 101.”

Fire crews including the fire boat tackled the blaze from around 2am on Saturday and their work continued when the fire reignited later in the morning.

The Staiths fell into disrepair following the decline of the coal industry but have been restored and used as a visitor attraction, holding public events such as markets.