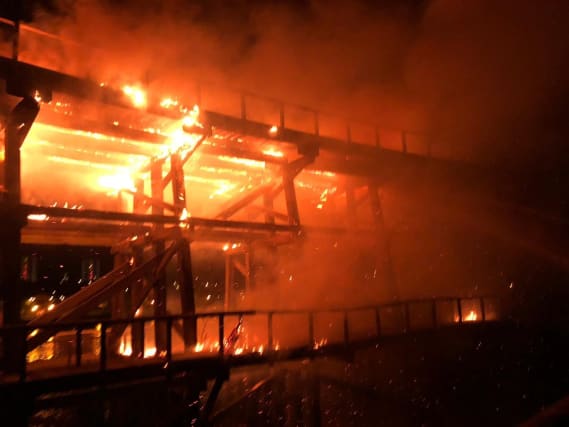 Arsonists torched a historic landmark and badly damaged what was thought to be Europe’s largest timber structure, police have said.

An investigation has been launched into the fire at Dunston Staiths, in Gateshead – a grade II listed structure which opened 1893 so Durham coal could be dropped into boats on the Tyne below.

The alarm was raised at around 2.30am with crews from the Tyne and Wear Fire and Rescue Service, including the Fireboat, working through the night to bring the blaze under control.

It reignited later in the morning.

Northumbria Police are treating the fire as arson.

Detective Inspector Andy Gimza said: “This fire has caused a significant amount of damage to this historic monument.

“This incident sadly comes after months of fundraising to restore the structure following a fire in 2019.

“At present we’re treating this as a deliberate act of vandalism, so a criminal investigation has been launched.

“If you saw anyone suspicious in the area of the Staiths late Friday night or early Saturday morning, please get in touch.”

The Tyne and Wear Fire and Rescue Service tweeted pictures from the scene overnight and said: “As you can see from these photos, the fire at Dunston Staiths was extremely serious.

“If you have any information about this incident contact @northumbriapol on 101.”

The Staiths fell into disrepair following the decline of the coal industry but have been restored and used as a visitor attraction, holding public events such as markets.

Anyone with information is asked to visit the ‘Report an Incident’ section of the Northumbria Police website or call Crimestoppers anonymously on 0800 555 111.