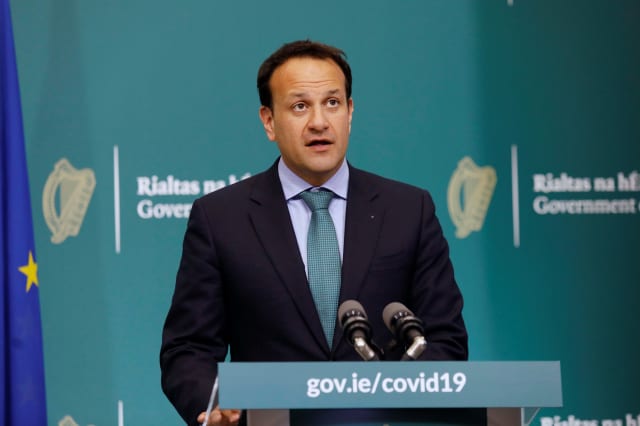 He hoped to be able to negotiate a programme for the new administration’s priorities before the end of this month.

Discussions between leading parties Fine Gael and Fianna Fail and would-be partners from the Greens have been taking place this week to appoint a new team of ministers following last winter’s inconclusive general election.

Negotiating teams have been discussing policies around the economy, housing, healthcare and climate change.

Mr Varadkar said: “Talks are going well and I am still confident that it will be possible to negotiate a Programme for Government, ideally before the end of the month.”

Fine Gael and Fianna Fail have been attempting to draw other parties and Independents into the talks process, however both Aontu and the Social Democrats have ruled themselves out.

Mr Varadkar warned governance would be a hard labour as Ireland recovers from the downturn caused by coronavirus restrictions.

He said: “It is not going to be an easy time to be in government.

“The economic consequences of this virus are going to be very severe in terms of jobs lost, in terms of businesses which will not open again, in terms of the impact on public finances.

“This country needs a government that is led by people that want to be in government even when it is not easy.”

Efforts to form a government are intensifying three months on from February’s inconclusive election.

Fianna Fail won 38 seats (a tally reduced to 37 after one of its TDs was re-elected speaker), Sinn Fein 37, Fine Gael 35, with Labour and the Greens on six and 12 respectively.

A majority of 80 seats is needed to form a government.

On Friday, the Labour Party formally ruled itself out.

Leader Alan Kelly wrote in a letter to the Taoiseach and Fianna Fail leader Micheal Martin that their position on economic policy was at odds and criticised a “lack of clear direction” on a coronavirus unemployment payment.

He added: “I recommended to our parliamentary party today that at this time we would not take part in formal discussions on a Programme for Government.

“It was our united view that your talks with the Green Party should now be given the space and time to reach a conclusion as if successful, such a government would command a majority in the Dail.”

Finance Minister Paschal Donohoe said he and his colleagues in Fine Gael were doing all they can to see if a government is possible.

He added: “I believe the defining challenge that we will have in addition to our great public health challenge is our efforts to get people back to work.”

He told RTE’s Morning Ireland the country had a level of unemployment that would have been unimaginable a number of weeks ago and that was causing so much harm.

“We have to get our country back to work. We have to get those who never thought they would lose a job again back in a job that respects them and pays them a good income.

“I believe in order for that to happen, we need to have a government formed that has an affordable, accountable programme for government and myself, (Tanaiste) Simon Coveney and all the members of our negotiation team are putting our best foot forward to try to do that.”