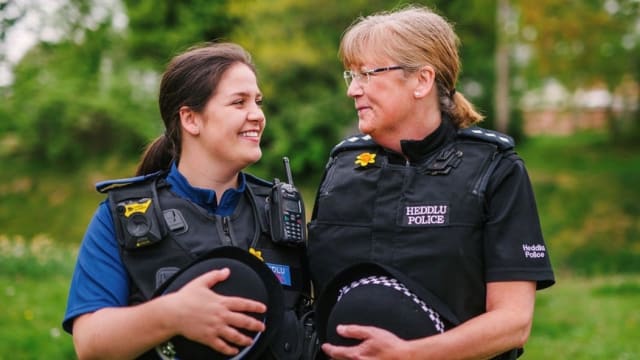 An inspector who spent 30 years in policing has rounded off her career by going on patrol with her officer daughter.

Chief Inspector Nicky Carter took to the streets of Lampeter with daughter Charlotte, 19, who began working as a police community support officer (PCSO) six months ago.

The pair, both at Dyfed-Powys Police, had long imagined patrolling together in uniform – with PCSO Carter wanting to join the police from a young age.

“I joined in September 2019, and have wanted to be a part of Dyfed-Powys Police since I can remember,” she said.

“I was inspired by my mum working in the force, and thought it would be a great career.

“I’m really glad I joined before she retired, as it gave us the opportunity to go out on foot patrol in the town where mum had been the local inspector. It was really lovely.”

Chief Insp Carter began her career at North Wales Police before ending her time at Dyfed-Powys Police in her home division of Ceredigion, transferring to Aberystwyth in 2006 to take up an inspector post.

She said she was “very proud” of her daughter for joining the police.

“As a parent and a former officer, it is natural to be concerned about what may occur when Charlotte is at work,” she said.

“However, the training, mentoring and support from staff and supervisors is second to none, so that offers me reassurance.”

During her career, Chief Insp Carter became a founding member of female networks in two forces and a committee member of the British Association of Women in Policing.

She said her most important advice was for police officers to look after themselves and their wellbeing.