Ministers and unions urged to end ‘squabbling’ over reopening schools 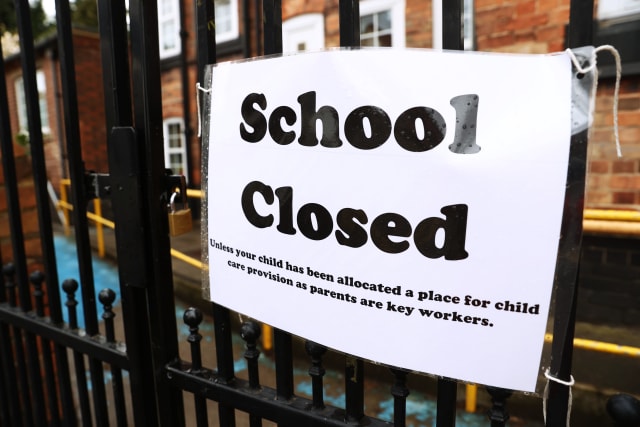 Ministers and teaching unions have been urged to “stop squabbling” and to work together to begin reopening schools in England.

Anne Longfield, the children’s commissioner for England, said many children were struggling away from the classroom and the lack of education would impact on future life chances.

Her intervention came amid fears that Boris Johnson – who wants primary schools to begin opening their gates from June 1 – has moved too quickly with measures this week to ease the coronavirus lockdown in England.

With another weekend of fine weather expected, there are concerns in some rural communities that the relaxation of restrictions on movement would see an influx of visitors bringing the risk of new infection.

Meanwhile, a meeting on Friday between teaching unions and Government scientific advisers intended to reassure staff that it was safe to go back to the classroom ended inconclusively.

The union representatives said they had been left with more questions than answers, with one union leader describing the scientific evidence as “flimsy at best”.

They were backed by the doctors’ union – the British Medical Association – which said schools should not reopen until the numbers of coronavirus cases were “much lower”.

However, Ms Longfield insisted the decision by ministers to start bringing back primary pupils was “sensible” and said there should be an “aspiration” to get all children back in school before the summer.

She pointed to data suggesting NHS nurseries that have remained open during the lockdown had not suffered coronavirus outbreaks as evidence it could be done safely.

“All sides need to show a greater will to work together in the interests of children,” she said.

“We cannot afford to wait for a vaccine, which may never arrive, before children are back in school.

“It’s time to stop squabbling and agree a staggered, safe return that is accompanied by rigorous testing of teachers, children and families.”

– Trials are to begin with special “Covid dogs” which may be able to detect the disease before symptoms appear;

– A survey by the Royal College of Nursing found one-in-three nurses and healthcare assistants caring for coronavirus patients said they did not have adequate personal protective equipment (PPE);

– The Resolution Foundation think tank has estimated almost a third of the country’s lowest-paid workers have been furloughed or lost their jobs altogether as a result of the pandemic.

Concerns about Mr Johnson’s decision to begin easing the lockdown in England were heightened by the disclosure that the R number – measuring the transmission rate of the virus – has edged up.

The Scientific Advisory Group for Emergencies (Sage) said the latest data suggested R in England was between 0.7 and 1.0 – compared to a previous estimate of 0.5 to 0.9.

Speaking at the daily No 10 press conference, Health Secretary Matt Hancock said there was a lag in the figures and that they were confident it remained below one.

Officials have said that if it goes above one, there is a danger the outbreak will take off again with an exponential rise in the number of new cases.

The latest rise in R is thought to be driven by the virus spreading in care homes and hospitals rather than the wider community.

However, some civic leaders in northern England, including Greater Manchester mayor Andy Burnham, have voiced concerns it is still spreading more quickly in their areas and it was too soon for any easing.

In Liverpool, the city council confirmed that it would continue to allow only the children of key workers and vulnerable pupils to attend school from June 1.

The deputy chief medical officer for England, Dr Jenny Harries, insisted the risks were low with just two or three out of 1,000 of the population currently thought to be infected.

“There’s a lot of anxiety I think around this but people need to think through – in an average infant school with 100 children the likelihood of anybody having this disease is very small and diminishing with time,” she said.

The lockdown restrictions have not been lifted to the same extent in the devolved administrations in Scotland, Wales and Northern Ireland.

But with the RAC estimating that 15 million leisure trips will be made by car in England this weekend, ministers said it was essential people continued to maintain social distancing.

Mr Hancock said: “This weekend, with the good weather and the new rules, I hope people can enjoy being outside, but please, stick with the rules, keep an eye on your family and don’t take risks.”